Crews complete $1.9B Regina Bypass on time, on budget after four years of work 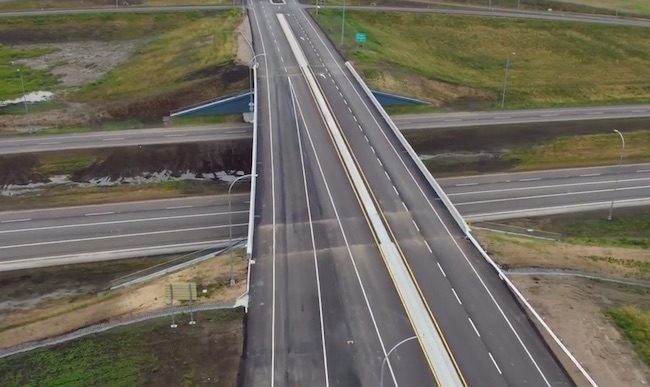 The largest highway project ever undertaken in Saskatchewan officially wrapped up this week as the 61-kilometre Regina Bypass fully opened to traffic Oct. 29.

The $1.9 billion construction effort took four years, adding 37-kilometres of new four-lane highway while upgrading another two dozen kilometres of road. The bypass will allow through traffic on the Trans-Canada Highway to swing around Regina to the south.

“The opening of the Regina Bypass is an important milestone for our province and will greatly improve the transportation of goods in and out of our province’s capital city,” Scott Moe, Saskatchewan’s premier, said in a release. “More importantly, the Regina Bypass will greatly improve the safety of our roads and highways for our families and industries.”

Spurred, in part, by a high number of collisions at junctions just east of Regina, the project added 12 new interchanges and 33 new bridges and viaducts.

Delivered through a P3 agreement, the $1.9 billion price tag for the highway project includes approximately $700 million for 30 years of maintenance on the new road. France-based Vinci took the lead on the design-finance-build-operate-maintain project with a 37.5 per cent stake in the Regina Bypass Partners consortium. U.S. engineering firm Parsons Enterprises and Toronto-based investment fund Connor Clark & Lunn each have a 25 per cent interest, while Graham Group Ltd. holds the remaining 12.5 per cent share.

Construction started in summer 2015 and included three main segments to the east, south and west of Regina.

Altogether, about 8,200 construction jobs were created over the four years of work. The build team also boasts a near-perfect safety record with a single lost-time incident despite five million hours worked.