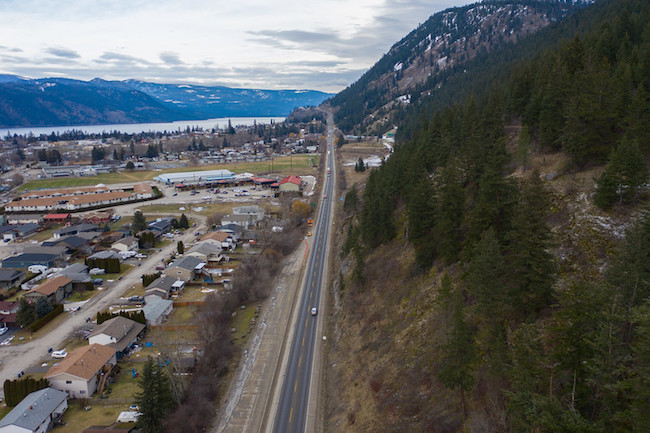 Construction in Chase is part of a $1 billion project to widen the Trans-Canada between Kamloops and the Alberta border. PHOTO: Province of B.C.

With construction already underway on the first component of the Trans-Canada Highway widening project in Chase, B.C., the province has set the stage for construction to start this spring on the second phase of work.

The B.C. government tendered the Chase Creek West to Chase Creek Bridge project April 1, noting the scope includes expanding a 1.6-kilometre section of the Trans-Canada east of Kamloops from two to four lanes. A grade-separated interchange Brooke Drive, as well as walking and cycling paths, are also included.

Construction started on the first portion of the project in Chase last summer. The total budget for the four-laning work in the village is $260.3 million, delivered through the province’s Community Benefits Agreement framework. It is one part of a $1 billion commitment to four-laning the Trans-Canada between Kamloops and the Alberta border over the next few years.

Crews are expected to be on-site to start work on the Chase Creek West to Chase Creek Bridge segment later this spring. Construction will run though fall 2023.