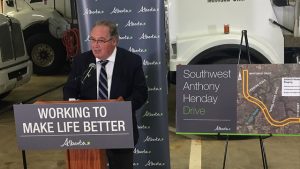 EDMONTON—The southwest leg of Anthony Henday Drive in Edmonton will be expanded from four to six lanes.

Construction on the 18-kilometre stretch of road, made primarily of concrete, is expected to take three years, beginning in 2019. The province anticipates design work for the project to be finalized later this year.

Anthony Henday Drive, which opened in October 2016, is an 80-kilometre freeway that encircles Edmonton. The expansion of the southwest portion is a result of increased traffic volume in the city.