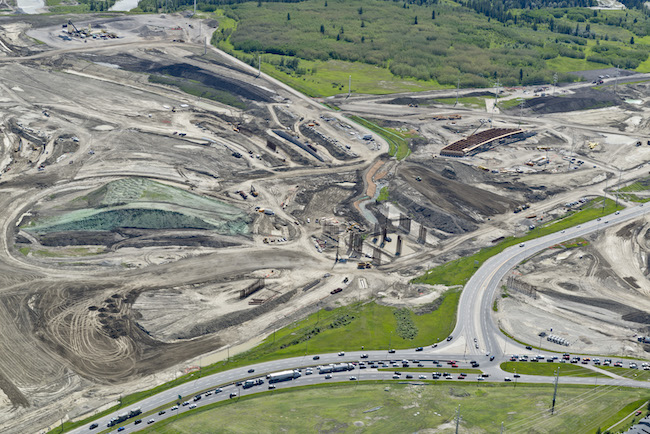 Work on the southwest portion of the ring road. The entire 101-kilometre route is expected to be open to traffic by 2022. PHOTO: KGL Constructors

The province said March 5 that it has finalized two contracts with three construction companies that will nearly wrap-up work on the 101-kilometre Calgary Ring Road. Construction has been underway on the project in numerous stages for more than a decade and the latest pair of contracts for the western segment of the route should keep crews on track to complete the ring by 2022.

“This project is something the people of this city have been asking to have completed for nearly 50 years,” Brian Mason, the province’s minister of Transportation, said in a statement. “When complete, travel will be more efficient, industry will operate with fewer delays and, in the process, thousands of jobs will be supported. We will have shovels in the ground this spring.” 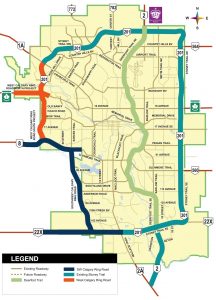 A map of the ring road. Click to enlarge

EllisDon will spearhead the larger of the two jobs awarded Tuesday after inking a $463 million deal. The contractor will build a three-kilometre stretch of highway between Old Banff Coach Road and the Trans-Canada Highway, very nearly closing the loop with the existing northwest segment of the ring road. The job includes 18 bridges, reconstruction work on the Trans-Canada and a pair of interchanges. The province expects the project to create about 2,400 jobs over the next four years.

A Flatiron and Aecon team, meanwhile, will be responsible for the final northern linkage. The two contractors won an $89 million deal to twin the Bow River Bridge, just north of the Trans-Canada. The contract also includes widening about two-kilometres of the existing northwest portion of the ring road, which is also known as Highway 201 or Stoney Trail. The job is expected to create 300 jobs.

The pair of projects will bring the ring road one contract away from completion, and the province is moving on that job as well. It plans to issue a request for qualifications for the final southwest segment of the ring road in the coming days. That five-kilometre leg will meet up with the portion being built by EllisDon and with the under-construction Southwest Calgary Ring Road.

The province aims to have a contractor in place to start construction on the final stretch by spring 2020.

Crews are expected to have the entire ring road open to traffic by 2022.