Totaling $315.9 million, the project will see 49 segments of roadway rehabilitated across the city, including sidewalk repairs and drainage improvements.

At $18 million, repairs on Fermor Avenue between Lagimodiere Boulevard and Plessis Road will be the project with the highest price tag to receive funding, followed by Roblin Boulevard between Shaftesbury Boulevard and Deippe Road at more than $15.8 million.

The city announced Sept. 7 that it had reached a tentative agreement with Ottawa to access the $100 million from the New Building Canada Fund, pending approval from council. Manitoba committed an additional $100 million to the project, and the City of Winnipeg will provide the remaining $115.9 million. 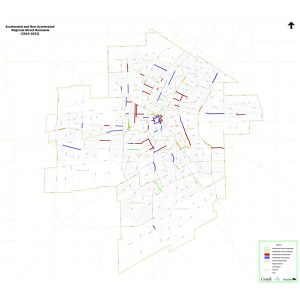 “If approved by council… we will be able to accelerate regional road improvement across our city, resulting in an additional $100 million in federal funding being invested into regional road repairs over the next five years,” said Winnipeg Mayor Brian Bowman.

Council is expected to make a decision on the road renewal recommendations Sept. 20.