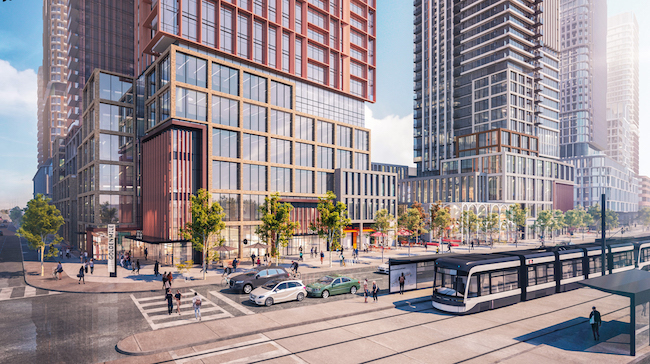 A rendering of the redeveloped mall at 1880 Eglinton Ave. East. PHOTO: The Daniels Corp./Giannone Petricone Associates

The proposed makeover of the Golden Mile Shopping Centre in Scarborough, Ont., already several years into planning, is poised to start in 2023.

Choice Properties Real Estate Investment Trust said March 30 it has partnered with builder and developer The Daniels Corp. on Phase One of the 19-acre redevelopment project on the east end of Toronto.

“We have long recognized the importance of the Golden Mile as an opportunity to make a significant impact, not just within our 19-acres, but on the much broader aspiration to positively influence the entire area for generations today and tomorrow,” said Rael Diamond, president and CEO of Choice Properties REIT, in a release. “The future redevelopment of these lands and the Golden Mile neighbourhood as a whole is about building a complete community.” 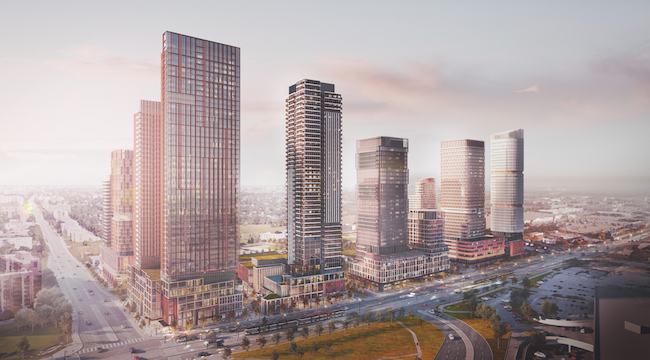 A rendering of the multi-phase project in Scarborough’s Golden Mile. The completed project could total 10 towers. PHOTO: The Daniels Corp./Giannone Petricone Associates

The major overhaul of the mall is part of a wider, city-backed redevelopment of the the Golden Mile area, located along Eglinton Avenue East between Victoria Park Avenue and Birchmount Road. Underpinned by the new Eglinton Crosstown LRT project, planners intend to transform the area — today made up mainly of big box stores and strip malls — into a mixed-use community home to as many as 40,000 people over the next 20 years. Along with the Choice Properties and Daniels proposal, a number of other developers are working on major building projects in the area.

Phase One of Choice Properties’ plan to replace the 67-year-old mall includes the construction of two condo towers, as well as a purpose-build rental building. Ground floor retail, office space, a pedestrian mews, as well an institutional component through a collaborative project between the University of Toronto Scarborough and Centennial College, are also included in the plans.

Pending the necessary approvals, the team anticipates starting construction in 2023 and completing the first phase of redevelopment in 2026.