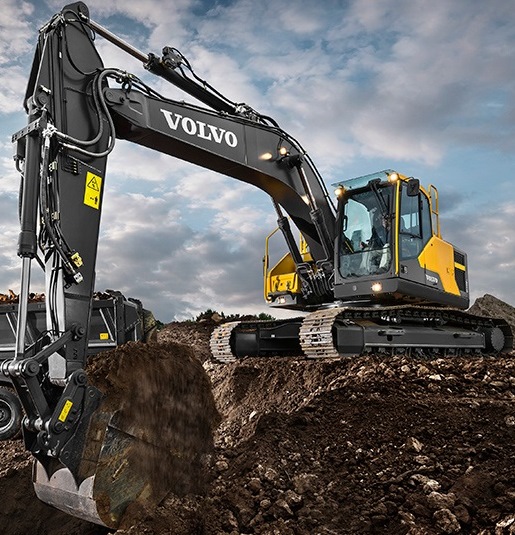 The 22-ton Volvo EC220E is fitted with a top-range Tier 4 Final Volvo D6 engine with an auto engine shutdown feature to help reduce fuel consumption and emissions by switching off after the excavator has been inactive for a pre-set amount of time. Fuel efficiency has been improved by 5 per cent. The boom float function allows the pump power normally used for boom lowering to be saved or used for other functions, also reducing cycle times. The new valve controls the boom operation proportionally according to the arm operation while grading. It is capable of maintaining the bucket teeth parallel to the ground even in H mode during the entire cycle. The HMI (human machine interface) — including the joysticks, keypad and easy-to-read 8-inch LCD monitor — are ergonomically designed and can be fine-tuned according to operator preference. It includes an optional side-view camera in addition to the rear view camera to cover the visual blind spots. The X-shape lower frame enables even weight distribution for increased stability and durability and helps prevent damage from rocks and debris. The heavy-duty undercarriage creates tractive force in demanding terrain. The boom and arm includes internal plates positioned to support pressure points during a wide range of applications. The excavator can be adjusted to take a wide variety of hydraulic lines, which are factory fitted with breaker and shear piping (X1), as well as rotator piping (X3). A password-protected attachment management system has pre-sets and permits hydraulic flow and pressure to be adjusted (set or memorized) for up to 20 different attachments. The response sensitivity can be adjusted using the keypad, allowing the operator to tailor machine response for maximum impact in different environments.