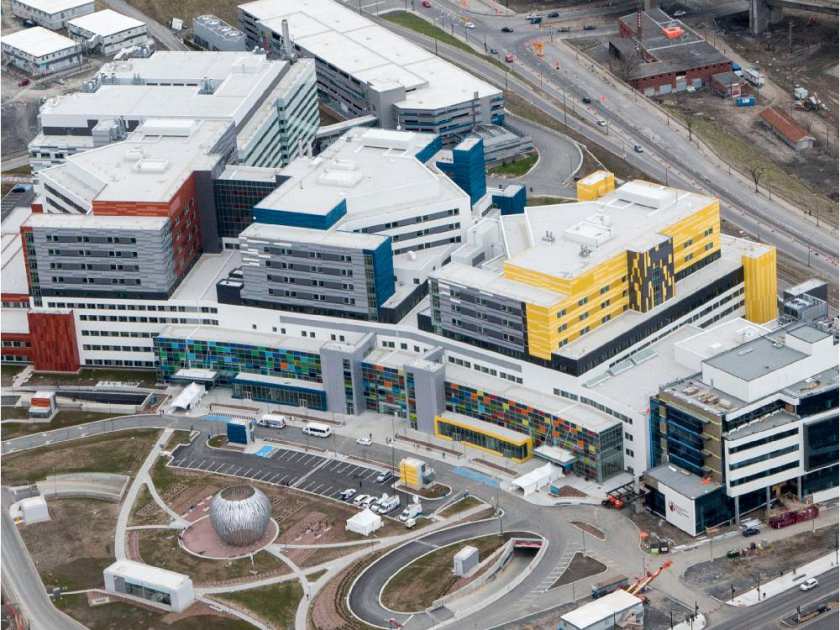 McGill Healthcare Infrastructure Group (MHIG), a partnership composed of SNC-Lavalin (TSX: SNC) and Innisfree has filed a $330 million law suit against the McGill University Health Centre (MUHC) and the Government of Quebec over the P3 deal to build and operate the hospital’s Glen site.

While no claims have been proven in court, MHIG is seeking compensation for additional costs incurred during the design and construction of the MUHC hospital centre’s Glen site as well as for present and future costs related to managing and maintaining the hospital centre’s assets.

“After more than two years of negotiations which have not been fruitful, MHIG now has no other choice but to turn to the courts, as the agreement provides,” says MIHG a release issued this morning.

Under its agreement with the MUHC, MHIG is responsible for financing, designing, building and maintaining the hospital complex as well as managing its assets until September 30, 2044. MHIG is entitled to compensation from the MUHC to cover costs associated with the additional work that was requested and the need to fast-track work in order to prevent any delays to the project, according to the statement.

“MHIG delivered a quality, functional complex to the MUHC in accordance with the conditions and schedule set out in the agreement,” the statement says. The project was recently lauded for being the first Quebec hospital to achieve LEED Gold status

MHIG claims the additional costs are directly related to the numerous changes requested by the MUHC to enhance and expand the health complex above and beyond the scope of the contract, the MUHC’s inability to provide information about the facility’s layout and equipment destined to the health complex in a timely manner, and the MUHC’s alleged misuse of the review process.

McGill Healthcare Infrastructure Group, G.P. (MHIG) is a general partnership made up of SNC-Lavalin and Innisfree. As part of a public/private partnership (PPP) with MUHC, MHIG has designed, built and financed the new hospital complex at the MUHC Glen site, which it will operate until 2044.

The McGill University Health Centre (MUHC) and the Government of Quebec have not yet issued a formal response to the suit.

According the released statement, the suit makes the following claims and allegations, none of which have been proven in court.

Numerous changes increasing the size of the facility

The changes requested by the MUHC, which included adding a sterile core to the operating area and expanding the central pharmacy, meant that the facility needed to be 5,028 square meters (54,121 square feet) bigger than originally planned. Most of the many changes required were requested at a point in time in the building process that had a major negative impact on MHIG’s work and resulted in considerable amounts of both incremental cost and lost time and productivity.

Inability to provide layout information in a timely manner

The MUHC did not provide site layout information in a timely manner, which caused MHIG’s construction teams to proceed with their work with incomplete or incorrect information so that they could make progress to meet the Project delivery deadline. When layout information did become available, it often meant that changes had to be made to structures that had already been built. Throughout the construction process, delays and changes on the part of the MUHC resulted in work being completed out of sequence and being subject to amendments resulting in cost and delivery deadline progress impacts, such as:

Inability to provide equipment information in a timely manner

Several times during the Project, the MUHC did not provide equipment lists and specifications in a timely manner, making it difficult for MHIG to ensure on-time completion of works. With this information lacking, MHIG was forced to create drawings and specifications based on equipment available on the market and achieve the design and construction work based on these assessments. When the actual equipment selected by the MUHC was finally communicated to MHIG, this necessitated expensive changes to designs and construction work to accommodate the selected equipment.

The MUHC’s misuse of the review procedure

When requesting changes to the initial plan, the MUHC should have issued change requests or change orders, as stipulated in the agreement, which would have allowed MHIG to obtain additional time and compensation. Instead, the MUHC imposed new requirements and changes on MHIG by repeatedly misusing the review procedure to suggest that MHIG’s work was not meeting specifications (which kept evolving with the changes MUHC required to the plan). By misusing the review procedure, the MUHC required MHIG to change several aspects of the design despite the fact that the design submitted by MHIG met the requirements set out in the agreement, and this resulted in additional costs and delays which had to be made up by MHIG to meet the project deadline.

The changes requested by the MUHC also had had considerable impacts on the management and maintenance of the hospital assets, as these activities are directly affected by the size of the complex and the type and number of equipment items and systems included in the facility.

In addition, even though the agreement stipulates that the MUHC can carry out some maintenance and repair works, these works must fall under the change procedures provided for in the agreement. And yet, the MUHC has carried out and continues to carry out this type of work unilaterally, which results in several negative consequences for MHIG, including: