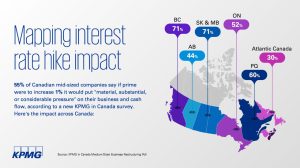 A new KPMG survey finds that Canadian business leaders are worried that higher borrowing costs could add additional stress to their pandemic recovery plans. Their concerns come on the heels of the Bank of Canada move last week to lift its overnight lending rate 25 basis points, the start of a widely anticipated rate hike cycle.

One of the key findings in the poll was that 55 per cent of business leaders at Canadian medium-sized companies say they would face “material, substantial, or considerable pressure on their business and cash flow” if the prime lending rate were to increase just one per cent. That sentiment was slightly lower, at 47 per cent, among respondents in the real estate and construction sectors, but it still means one in two are concerned.

“While we’ve seen one worrying challenge after another faced by Canadian companies over the past two years, rising interest rates could rachet up the stress for many, potentially choking off investment and growth,” said Paul van Eyk, partner and national leader for restructuring and turnaround services with KPMG in Canada. “Our poll findings clearly show that business leaders are warning not to raise rates too much or it’s going to hurt them.”

The pandemic has forced the majority of companies surveyed to restructure and reorganize their operations to address supply chain challenges, wage inflation and labour shortages. Most are wary of formal restructuring proceedings, however, as 79 per cent of respondents surveyed are afraid of the stigma of being associated with a financially distressed situation.

When the poll was conducted in mid-February amid trucker protests, escalating tensions in Ukraine and rising inflation, KPMG asked Canadian business leaders to identify their current single most-pressing concern. They ranked pandemic fatigue and the risk of future restrictions as their foremost concern followed closely by tight labour markets, supply chain challenges and rising energy prices.

Worries about inflation were in the top 10, but van Eyk believes this ranked lower only because most companies believe they can pass on rising costs to their customers. “But that’s a huge question mark,” he stated. “It remains to be seen if companies can continue to pass along all these higher costs and if the demand will continue to hold in the face of rising costs. If they end up having to absorb them, their profit margins will tighten and for many, it could lead to a new set of challenges.”

His advice is to plan for the best and prepare for the worst.

“Crises come in all shapes and forms at any time,” he stated. “We’ve had pandemic-related employee absenteeism, supply chain snarls, lack of skilled labour, rising energy costs and net-zero carbon commitments, and now the start of a rate hike cycle. It’s how your team considers all of its options, puts a plan in place and manages through issues that strengthens a company’s culture, its core values and, ultimately, its growth prospects.”