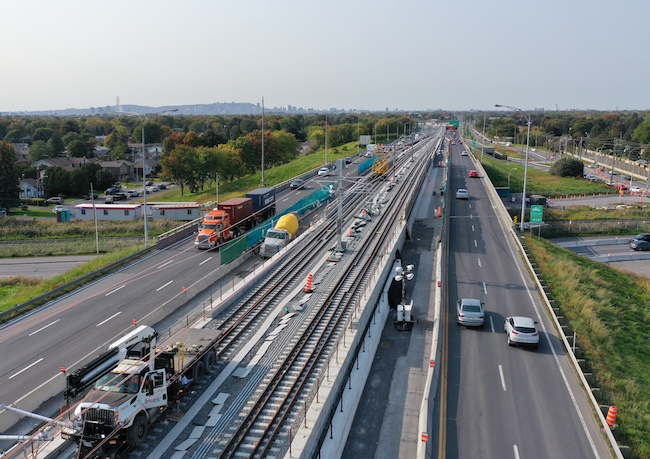 Work earlier this year on Montreal’s new Réseau express métropolitain, where construction was forced to pause for more than a month. PHOTO: CDPQ Infra

MONTREAL—Quebec’s manufacturing and construction associations say there will be major damage to Quebec’s economy if the government imposes a strict COVID-19 lockdown similar to what occurred last spring.

“The worst scenario for us would be to go back to the same situation we had last spring,” Proulx said in an interview. She said Quebec manufacturers lost $4 billion in sales when they were shut during the first wave of the pandemic and she expects a similar situation if manufacturers are forced to close again.

Legault is scheduled to hold a news conference late Wednesday and was meeting with opposition leaders Tuesday. According to multiple reports, the province may, for the first time since the spring, order “non-essential” manufacturers and the construction sector to close and extend the current closure of schools.

Quebec reported 2,508 new COVID-19 cases Tuesday and 62 more deaths, including 17 that occurred in the previous 24 hours. Health officials said COVID-19 hospitalizations rose by 23, to 1,317 — the highest number since late May — and 194 people were in intensive care, an increase of six.

The province says 2,529 doses of vaccine were administered Monday, for a total of 32,763. The test positivity rate in Quebec was 11 per cent on Jan. 3, the most recent date for which data is available, with 20,716 tests conducted.

Quebec has reported 215,358 cases of COVID-19 and 8,441 deaths linked to the virus since the beginning of the pandemic.

Proulx said that if Quebec were the only jurisdiction in North America to order factories to close, it would put the province’s manufacturing industry — which employs 450,000 people and accounts for 14 per cent of the provincial GDP — at a severe disadvantage.

“The market share that these foreign companies are gaining is there to stay; it’s very difficult for Quebec manufacturers to win them back.”

Proulx said manufacturers have put measures in place to prevent the transmission of COVID-19, adding that while there may be room for stricter rules in some parts of the industry, she said hasn’t seen the data that supports shutting down the whole sector.

About 27 per cent of active COVID-19 outbreaks in Quebec workplaces were identified in the manufacturing industry during the week ending Dec. 19, according to the most recent government data. Those outbreaks were tied to 1,336 infections out of a total of 3,367 infections linked to active workplace outbreaks that week.

Retail stores accounted for about 22 per cent of workplace outbreaks during the same period, while the construction sector was responsible for about 9 per cent.

He said the small number of outbreaks in his industry — which employs about half a million people in Quebec — suggests the measures currently in place are working. Houle, however, said the industry is open to having new discussions with health officials and unions about stricter measures that would allow sites to stay open.

With construction contributing around $1 billion to Quebec’s GDP every week, Houle said the economic cost of another shutdown would be “unprecedented.”

But Eric Boisjoly, director general of the construction wing of one of Quebec’s main labour federations, said measures to stop the spread of COVID-19 on work sites aren’t being enforced as much as they were when the industry reopened in the spring. He said the problem is more acute on smaller sites.

Workers, however, won’t be happy if construction sites are closed, he added. One of the big challenges, he explained, is uncertainty, because workers don’t know what kind of support will be available if they aren’t able to work.

He’d like to see the government identify specific problem areas and use a “surgical” approach to deal with the spread of COVID-19 in those sectors.

That would avoid the need for a full lockdown that could be “catastrophic” for Quebec’s economy, he said.