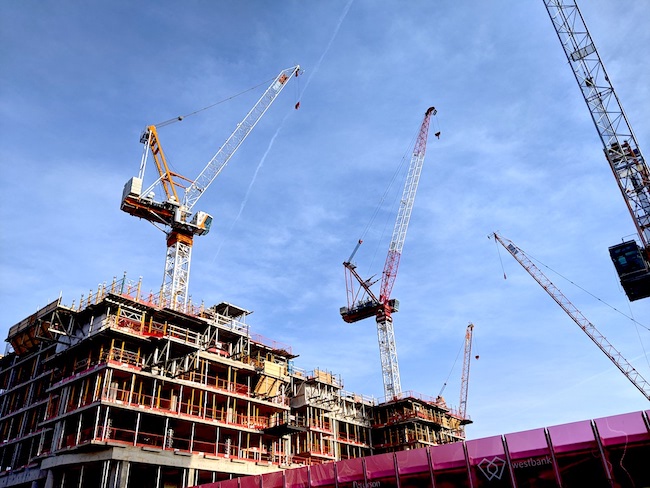 Residential Construction Council of Ontario president Richard Lyall said the exception is important because the province has not been producing enough housing to meet demand.

But provincial opposition members said the policy is confusing and unclear.

New Democrat Jennifer French said the government should have prioritized worker safety over keeping job sites open and acted more quickly on other housing policies such as banning evictions.

“If housing is going to be deemed essential, as we have seen with the continuation of the, you know, housing construction, then where’s the rent relief, or rent forgiveness?” said French.

Liberal Michael Coteau said he has no problem with construction continuing if job sites are safe, but said his constituents question construction crews coming into their condo buildings while they are told to stay at home.

Announced Jan. 12 under the Emergency Management and Civil Protection Act, the rule allowing condo construction and other residential and multi-use buildings is separate from exceptions to allow continued building for affordable housing, shelters and charities.

Related: Full details on what types of construction can continue

Meanwhile, the new rules require construction companies to show a building permit has been granted if they want to continue building single-family homes and townhomes.

Condos are a proxy for rental housing in many areas, Lyall said, amid a shortage of rental-only buildings and policies that mix affordable housing into standard projects.

“If housing supply — already in a deficit position — is stopped for a period of time, we can’t make up that time,” said Lyall, who noted that construction has slowed by necessity during the pandemic to space out workers.

“While we’re building purpose-built rental housing still — and there has been an increase in that — it’s still far below other jurisdictions.”

The rules are stricter than before and close to what was in place in April 2020, which the Building Industry and Land Development Association and the Ontario Home Builders’ Association said was necessary.

But based on the province’s announcement, many other job sites are allowed to stay open under the new rules. They include construction projects with permits, and any projects related to adding capacity for schools, child care, health care, long-term care or safety or reliability updates to transit, energy, mining or justice projects beyond day-to-day maintenance.

Although specific regulations are still coming, the province’s announcement appears to allow for construction supporting operations of internet services, and critical construction activities for petrochemical plant projects that are already underway or are critical to maintenance and operations. Another exception allows construction to march on for projects funded by the Crown or municipal governments.

The long list of exceptions for construction companies comes amid projections that 1,000 COVID-19 patients could enter intensive care by early February. The provincial government said construction sites will be among the workplaces targeted by upcoming inspections meant to enforce its tightened restrictions.

Less than one per cent of the more than 10,000 COVID-19-related WSIB claims allowed so far are in construction.

The office of Monte McNaughton, Ontario’s minister of Labour, Training and Skills Development, said it has evidence that “the vast majority of employers and workers, including those in construction, are following COVID-19 safety requirements when working.”

“When done safely, the delivery of critical infrastructure, housing, and transit projects will help to drive the province’s economic recovery,” McNaughton’s office said.

But French said the policy lacks clarity and details.

“Those details should always err on the side of safety and health and should not be a developer wish list,” French said of the new construction policies announced this week.

“I live in Durham Region, and we know all too well about the pressure from the development industry and developers. Very clearly, this government makes a lot of decisions based on those pressures.”

Lyall said the decision to keep many construction sites running reflects a predicament for the government. But, he said, home construction and renovation also has the potential to improve tenants’ health by preventing crowding and unsafe conditions. He said many of the condo units breaking ground today could house people within the year.

“The government’s trying to thread the needle between the health-care system being overwhelmed and then the economy being destroyed,” said Lyall. “It’s a tough call. In terms of what’s essential, we’ve always maintained that housing is essential.”