Construction segment growing at faster pace than most sectors, gaining 118,000 positions in past 12 months. 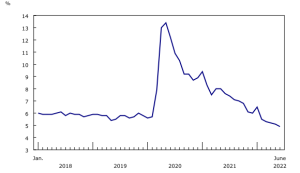 Statistics Canada is reporting that the unemployment rate hit a new historic low of 4.9 per cent in June, down 0.2 percentage points from the previous record in May. Canada’s unemployment rate has fallen each of the past four months. The total number of unemployed workers fell by 54,000 to 1 million.

Both employment and unemployment fell in June, bringing the labour force participation rate—the proportion of the working age population who were either employed or unemployed—down 0.4 percentage points from May to 64.9 per cent.

The drop in labour force participation in June was not associated with an elevated number of discouraged searchers. There were 421,000 people who wanted a job but did not look for one, which was little changed from May. The adjusted unemployment rate dropped to 6.8 per cent in June, marking the second consecutive record low.

Actual employment fell by 0.2 per cent, or 43,000 positions, in June. The loss was almost entirely due to a decrease among workers aged 55 and older. Self-employment also declined, while the number of employees in both the public and the private sectors held steady. Total hours worked rose in June, the first increase since March 2022.

In the core-working ages of 25 to 54, employment was little changed for both men and women in June. That could also be said for male and female youth aged 15 to 24 as the employment rate in this age group (58.5 per cent) stayed close to the pre-pandemic high recorded in April 2019 (58.7 per cent).

Making considerable gains in the number of people working was the construction sector, which grew by 23,000 workers. Ontario’s gain of 19,000 accounting for the majority of the increase. On a year-over-year basis, employment in construction grew at a faster pace than most other industries, gaining 118,000 positions, an increase of eight per cent.