Movement of workers greatest in Quebec and Ontario 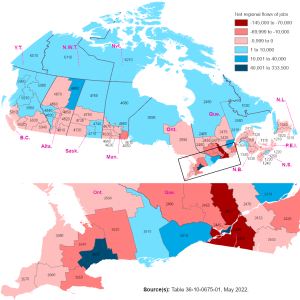 Statistics Canada reports that, in 2021, Quebec and Ontario contained the economic regions that were the largest sources or destinations of workers employed outside of their home economic region. All economic regions in other provinces posted a much lower net job flow (fluctuating between a gain of 10,000 jobs and a loss of 10,000 jobs) with the exception of Wood Buffalo–Cold Lake in Alberta and Winnipeg in Manitoba.

As labour demands may exceed local availability, whether long-term or temporarily, some economic regions depend on workers from other regions of the country. As a result, many paid workers leave their home economic region to work outside of it. They may commute daily or make one or more round trips each month.

These exchanges of workers between regions result either in a positive net flow when the region receives more external workers than it provides to other regions, or in a negative net flow in the opposite situation.

In the 2021 data, StatsCan found that each economic region that receives a large number of workers is surrounded by a cluster of economic regions that send a considerable workforce to different destinations.