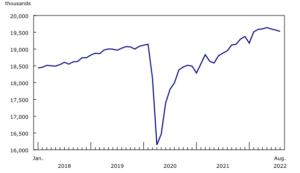 The latest figures released by Statistics Canada indicate that while employment decreased by 40,000 in August, the 0.2 per cent drop from July still left the year-over-year comparison almost four per cent higher, with an additional 593,000 people in full-time employment compared to August of 2021.

The trend was similar for the construction sector, where there were 28,000 fewer workers in the sector in August, when compared to July, but the month-to-month dip of 1.8 per cent still left employment in construction 88,000 positions higher than in August 2021, a year-over-year increase of 6.2 per cent.

Overall, employment fell among youth aged 15 to 24 in August, primarily young women, as well as among people aged 55 to 64. Employment gains in professional, scientific, and technical services, were more than offset by declines in educational services and construction.

The rate increased for four of the six main demographic groups in August, including young men aged 15 to 24 (11 per cent); women aged 55 and older (5.2 per cent); core-aged men (4.6 per cent); and core-aged women (4.5 per cent). It was little changed among young women and older men.

The adjusted unemployment rate, which includes people who wanted a job but did not look for one, rose 0.5 percentage points to 7.3 per cent in August. This increase was largely due to the rise in the number of unemployed, rather than an increase in those who were outside the labour force but wanted work.

Long-term unemployment—the number of people who had been continuously unemployed for 27 weeks or more—rose by 22,000 (13.7 per cent) in August, offsetting a similar size decline in July. Long-term unemployment expressed as a proportion of the total labour force was 0.9 per cent in August, the same as its February 2020 pre-pandemic level.

The total size of the labour force grew by 66,000 in August, and the participation rate ticked up 0.1 percentage points to 64.8 per cent.

Statistics Canada says that while the number of job searchers has increased by 106,000 since June, potentially increasing the pool of available workers, many employers are likely to continue to face significant challenges filling vacant positions. As of June 2022, for the first time since data from the Job Vacancy and Wage Survey became available in 2015, there were fewer unemployed people (989,000) than job vacancies (1,038,000). Results from the Canadian Survey on Business Conditions conducted during the third quarter of 2022 indicate that nearly 40 per cent of businesses in Canada expect recruiting of skilled employees would be an obstacle in the next three months.