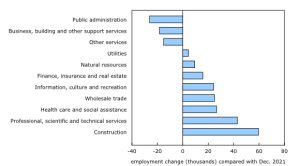 Employment in Canada climbed 337,000 in February, a gain of 1.8 per cent that more than offset losses felt following stricter public health measures in January. The unemployment rate dropped a full percentage point, to 5.5 per cent, a rate not seen in almost three years.

Other indicators point to an increasingly tight labour market in February. Total hours worked increased 3.6 per cent while the proportion of the population aged 15 and older who were employed, rose to almost 62 per cent, marking its first return to pre-pandemic levels.

Employment in the goods-producing sector rose 44,000 in February, marking the third consecutive monthly increase. The construction industry accounted for the majority of the increase, with employment up by 37,000.

Employment in the industry has increased by 95,000 workers in the last three months, following an acceleration in economic activity in the industry, as the value of building permits reached an all-time high during the fourth quarter of 2021.