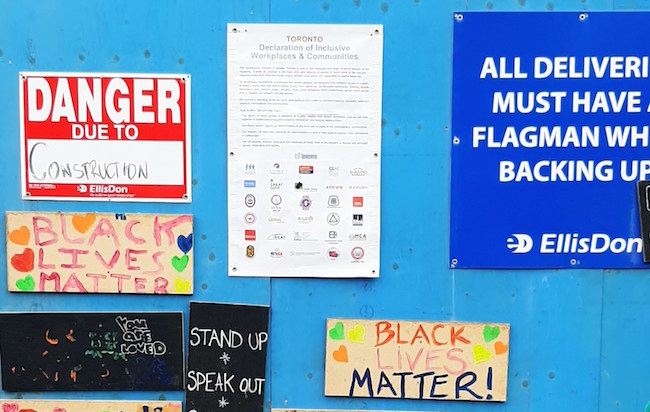 With new declaration banners plastering construction hoarding across Toronto, a coalition of owners, contractors, unions, and industry associations came out in strong support of the Toronto Declaration of Inclusive Workplaces & Communities last week, recommitting to addressing racism and discrimination throughout the industry.

The latest push to promote diversity comes as part of an evolving response to a series of racist incidents on job sites across the city last summer.

“RESCON is proud to be part of the growing coalition taking a stand against anti-Black racism in Toronto — a necessary show of support and solidarity with BIPOC in our workforce” Richard Lyall, RESCON’s president, said in a release. “This declaration will also help ensure that inclusion remains a top priority as we recruit our next generation of skilled trades workers.”

Nine months after a pair of nooses first appeared on a job site on the east end of Toronto, the CDCO, and others, have implemented anti-racism training for staff and members as the industry works to promote inclusivity and prevent any further racist acts on job sites.

During the panel, Michael Sherrard, the founding member of Sherrard Kuzz LLP broke down what constitutes harassment and when employers are required to open an investigation.

Under the Ontario Human Rights Code, he explained, harassment is defined as “engaging in a course of vexatious comment or conduct that is known or ought reasonably to be known to be unwelcome.” The code also lays out 16 “prohibited grounds,” including race, place of origin, sex, sexual orientation, gender identity, age, and marital status.

Protection from harassment extends well beyond racism, sexism and other commonly-cited areas, however. Typically, Sherrard said, harassment requires repeated negative comments, though a single incident can qualify, hinging on severity. “Depending upon how the recipient is taking that information, those comments, it can become workplace harassment,” he said. “It may not violate the Ontario Human Rights Code, but it may absolutely violate the Ontario Health and Safety Act.”

Under the broader OHSA definition, behaviour known to be unwelcome or reasonably thought to be unwelcome can constitute harassment. Sexual harassment as well as sexual solicitation or advance are also covered under the act.

Employers are responsible for launching investigations when “incidents and complaints” occur, Sherrard said, adding that having a written complaint is not a requirement. “You don’t wait for writing, you’re looking for knowledge of an incident and/or a complaint.”

In Ontario, if a company fails to carry out a proper investigation, this could lead to the involvement of the Ministry of Labour, Training and Skills Development, which can then order an investigation be conducted the employer’s expense, Samia Hussein, a lawyer with Sherrard Kuzz LLP, said during the panel.

Hussein also laid out the proper process for fairly investigating harassment — from privately interviewing those involved, to documenting evidence.

A recording of the complete virtual panel, which goes in-depth on when and how to carry about an investigation is available here.