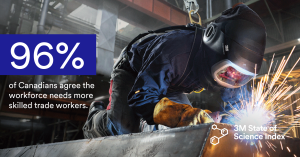 The latest research from the annual 3M State of Science Index reveals an overwhelming 96 per cent of Canadians agree that the country’s workforce needs more skilled trades workers, however most respondents also claim that they would not pursue a trade for themselves. This disconnect, say the study’s authors, has to be addressed since inspiring and supporting the next generation of skilled workers will be crucial to Canada’s economic recovery and addressing Canada’s growing labour shortage.

Despite Canadians thinking highly of skilled trades and the professionals who work in them, over three-quarters (76 per cent) of Canadians say they would never pursue a skilled trade for themselves, indicating the need for immediate action by Canadian organizations to champion skilled trades and do more to showcase fulfilling career pathways available to young Canadians.

“Getting Canada’s youth excited about skilled trades will be critical to ensuring a robust and healthy economy as we emerge from the impact of the global pandemic,” says Terry Bowman, manufacturing and supply chain leader at 3M Canada. “It is imperative Canadian organizations provide equitable access to STEM education to passionate young Canadians interested in pursuing a skilled trade. With over 900 skilled workers at 3M Canada, we recognize the importance of skilled trades to Canada’s economy and are fully committed to supporting the next generation of skilled workers.”

By 2025, 3M is committed to supporting and raising awareness of skilled trades through the creation of five million unique STEM and skilled trades learning experiences for underrepresented individuals.

“The shortage of skilled professionals in Canada is daunting. Misconceptions and lack of awareness surrounding these careers makes it difficult to fill the gaps, but it is important now more than ever that we encourage and support Ontarians pursuing these fields,” states Ian Howcroft, CEO of Skills Ontario. “For over 30 years, Skills Ontario has developed a growing portfolio of programs and initiatives to help students of all ages and backgrounds understand that they can find fulfilling career paths in the skilled trades and technologies. We also provide them, their parents, and their educators information on informative, skill-building programs and work-experience opportunities that can help them pursue these positions. The shortage is a challenge, but it is one we are addressing every day.”

3M sees the path forward for Canada’s skilled trades sector as beginning with the removal of barriers to skilled trades pathways and ensuring the right educational resources reach Canada’s youth. The company is prompting Canadian organizations act now to not only change perceptions of trades and technical programs but to introduce the field to youth who may not have considered pursing a skilled trade before.

The Canadian findings from the 2022 3M State of Science Index can be viewed at: https://sciencecentre.3mcanada.ca/3m-state-of-science-index.