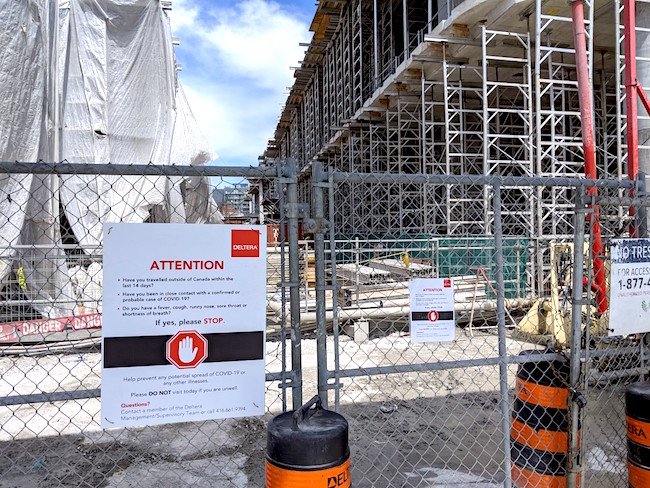 Many job sites in Ontario and Quebec were shut down temporarily in April. Others across the country reduced staff and slowed work to prevent the spread of COVID-19

After dodging pandemic-related job losses in March, the construction labour market felt the full brunt of COVID-19 in April.

The industry shed 313,600 jobs last month, according to the latest data from Statistics Canada. The huge decline in employment amounts to 21.1 per cent of the industry’s workforce, or one out of every five workers coast to coast.

“Construction in Quebec was particularly impacted, with employment in the sector declining by 38.6 per cent in April,” the federal agency said May 8 in its Labour Force Survey. “The Quebec provincial government directed all construction worksites to close on March 23, after the March LFS reference week, before allowing some of the residential construction sites to reopen on April 20, after the end of the April reference week.”

Along with widespread closures in Quebec, many contractors in Ontario were forced to halt work. The province permitted construction on certain infrastructure and residential projects, but ordered most other segments of the industry to pause.

Construction across the rest of the country has been allowed continue, though enhanced health and safety protocols, such as physical distancing, have reduced the number of staff on-site.

The wider Canadian economy continued to be hard-hit in April. Across all industries, job losses climbed to just under two million, double the number already recorded in March. The construction workforce, which was essentially unchanged in March, was the second-hardest hit in April. It trailed only the accommodation and food services industry, which saw employment slip another 34.3 per cent.

While the extent of the job losses is considerable, most expect to return to work. Statistics Canada said 97 per cent of the lay-offs last month were temporary. Within construction, April is likely to be the cruelest month. Ontario has begun a phased reopening of its construction industry and Quebec plans for a wholesale resumption of work May 11.

Additional health and safety measures designed to prevent the spread of COVID-19 have injected some uncertainty, however. Currently, it’s unclear how long physical distancing measures will need to remain in place, but the practice is expected to depress the number of workers needed on-site in the short term.

After big April gain, construction employment slips in May