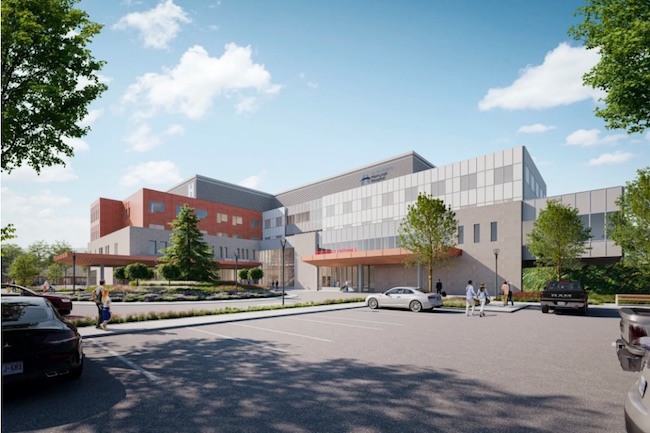 A rendering of the new community hospital in Grimsby, between Hamilton and St Catharines, Ont. PHOTO: Hamilton Health Sciences

The shortlisted construction consortia — Amico Sacyr Alliance, EllisDon Infrastructure Healthcare and Pomerleau Healthcare Partners — were selected from a pool of bidders that responded to a request for qualifications (RFQ) last November.

“We are encouraged by the quality of submissions received and look forward to seeing the full proposals from the shortlisted teams in the coming months,” said Kelly Campbell, vice-president of Corporate Services and Capital Development for Hamilton Health Sciences, in a release. “By this time next year, the successful design-build team will be selected; one of the final pieces before getting shovels into the ground.”

The project covers construction of a new, larger facility on a site behind the current West Lincoln Memorial in Grimsby. Plans for the new community hospital include a 24-hour emergency department, acute inpatient beds, day surgical services and advanced diagnostics service space.

Full details on costs will not be released until a contract is finalized, but Infrastructure Ontario (IO) estimated the value of the project at between $200 million and $499 million in its latest P3 market update, released earlier this month.

IO and Hamilton Health Sciences plan to issue a request for proposals (RFP) to the three shortlisted teams this summer, and then pick a winning bidder by next spring. Construction is scheduled to get underway once the province has finalized a contract with the chosen P3 team.