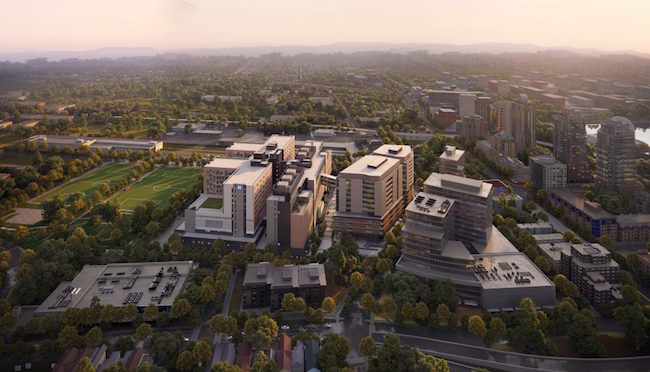 A rendering of the new 548-bed hospital that will replace a facility that first opened its doors in the 19th century. PHOTO: Providence Health Care

After disclosing a team led by PCL construction as the winning bidder last month, Providence Health Care and the British Columbia government said March 8 that work has now started on the new St. Paul’s Hospital. Billed as the largest hospital redevelopment project in the province’s history, the $2.2 billion project involves relocating St. Paul’s from its current site at 1081 Burrard St., to a new facility on an 18.4-acre plot in the False Creek Flats area.

“After more than a decade and a half of stalling, I am proud that our government gave this project the green light and took further action for this new, state-of-the-art facility,” Adrian Dix, the province’s minister of Health, said in a release. The St. Paul’s Hospital will continue its legacy of serving the people around the province now and in the future.”

The new acute-care hospital at 1002 Station St. will include 548 beds, an emergency department and numerous specialized services — from mental health and addictions to end-of-life care. Like its predecessor, which will remain open until the new facility opens, the new St. Paul’s will be a teaching hospital.

Originally opened in 1894, the sale of the old hospital last year for roughly $1 billion will help pay for the new site. The estimated cost for the new St. Paul’s is $2.174 billion, up slightly from an estimate of $2.083 billion last fall and from $1.9 billion previously. The B.C. government has committed $1.3 billion to the project, while the St. Paul’s Foundation has pledged to raise $225 million.

Construction will take more than half a decade and employ thousands of workers. The B.C. government said it anticipates the project will create 8,523 direct jobs, plus 5,383 indirect jobs. The hospital is scheduled to open in 2027.