While Montreal sleeps, every minute counts for subway maintenance workers 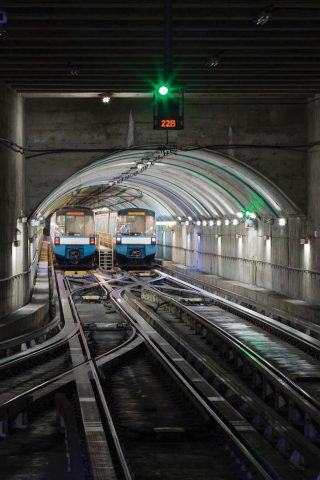 A pair of subway trains. Unlike many systems around the world that use steel wheels, Montreal’s trains use rubber tires. PHOTO: Société de transport de Montréal

MONTREAL—In the early hours of the morning, when most Montrealers are asleep, below the city’s surface subway maintenance workers are in a race against time.

Between approximately 1 a.m. and 5 a.m., more than 200 workers are dispatched to some 130 sites, where they’ll carry out jobs ranging from minor welding to major station rebuilds. Since the work is loud and requires heavy machinery, almost all of it needs to be wrapped up by the time the first train rolls out at 5:30 a.m.

“Each night, every minute counts if we’re going to finish on time,” said Marie-Claude Leonard, the executive director of the subway system.

The first portions of the 69-kilometre, 68-stop subway, known as the metro, were inaugurated in 1966.

Earlier this month, the city’s transit authority announced it would spend $1.6 billion to refurbish the aging network between 2020 and 2025, with funds divided between equipment upgrades, infrastructure repairs and new wheelchair-accessible elevators in 12 stations.

To showcase the type of work the funds would pay for, the Montreal Transit Corp. invited a few guests on a rare visit into the tunnels to highlight the work that happens after dark.

The electricity is cut to the tracks below. Men are using flashlights to direct convoys of heavy vehicles and work crews down the ramp and into the tunnels, where they’ll head to the 130 or so different jobs that need to be done in the next four hours.

A flatbed of journalists, politicians and transit authority officials rolls its way down the “drawer,” or long ramp that leads into the damp concrete tunnels of the metro’s Orange line.

Thick electrical cables are draped across the signs marking the station as a dozen men in hard hats examine exposed walls and operate a jackhammer behind a cloud of dust. The $10-million renovation includes excavating and building a new foundation to anchor two new walls for the station, as well as redoing the waterproof membrane, according to Donald Desaulniers, who oversees the system’s major projects. Due to the noise and piles of debris, the underground portion of the year-long project can only be done when the subway is shut down, giving workers a 2.5 hour daily window.

2:35 a.m., between Beaubien and Rosemont stations

In the middle of a dark tunnel, two workers wearing face shields are checking a chart. They’ll be using welding equipment to replace some of the metal pieces of the original 1960s-era track, worn down by the friction from millions of rubber tires.

Shiny metal framing lines the underside of the curved vault of this station, where workers are preparing to install an elevator as part of the transit authority’s $323-million plan to improve accessibility.

The project means drilling a shaft down from the surface, some 10 to 15 metres above, and building a new reinforced tunnel wall inside the one that was drilled from the rock in the 1960s.

“The concrete here doesn’t have any reinforcement inside, so that’s why we need to built a new one with reinforced bar so it can take the load,” Desaulniers says.

In addition to engineering concerns, the project involves consulting with architects to ensure the tunnel’s design and heritage are respected, he says.

3:10 a.m., between Mont-Royal and Sherbrooke stations

In the middle of the tunnel, two men on a lift are working to redirect the flow from one of the many water infiltrations that are common in the spring. The water will eventually pool in a low spot and be pumped out, explained Martin Chartrand, the transit authority’s equipment maintenance specialist.

“We don’t want to stop water from flowing, we want to control where it goes,” he said.

Here a crew is working on a major project to slowly replace the original metal bolts that both fix the rails to the ground and isolate them from electric currents. The painstaking work involves drilling holes, removing the old fixtures and installing new ones — all 340,000 of them. The transit authority hopes to have the first 10,000 done by the end of 2019, but finishing them all will take decades.

“Guys just starting out now will probably finish their careers with this job,” Chartrand says.

The convoy returns to the garage. The crews, however, have an hour to finish work and pack up before the rails are electrified at 5 a.m. By 5:30 the first train rolls out, sometimes passing the last straggling crews as they make their way back to the garage.