‘We will keep our commitments:’ Jason Kenney takes over as Alberta premier 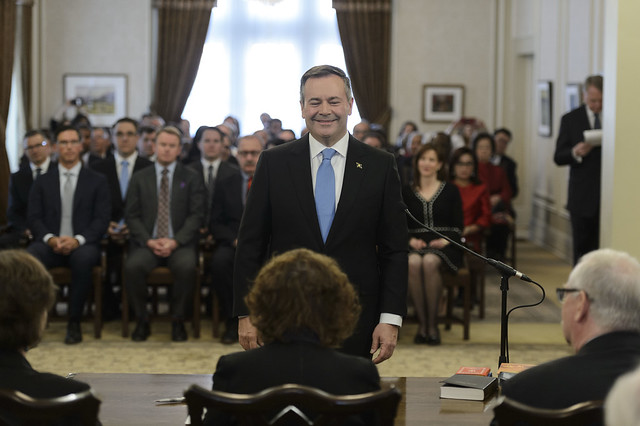 Kenney and his cabinet were sworn in April 30, marking a major change of direction for Alberta after four years under the NDP. PHOTO: Chris Schwartz/Alberta Government

Kenney and 22 members of his United Conservative caucus were sworn in as cabinet ministers in a ceremony at Government House.

They met for the first time immediately after. Kenney had said the first order of business would be to proclaim into law a bill that gives Alberta the power to cut oil shipments to British Columbia in response to that province’s opposition to the Trans Mountain pipeline expansion.

“We will keep our commitments, but I’m not going to disclose a secret cabinet agenda. Stay tuned,” Kenney said when asked if he would follow through on that promise.

Proclaiming the legislation, which was passed by former premier Rachel Notley’s NDP government, doesn’t mean he will immediately use it, he added.

“It’s not our intention to reduce shipments or turn off the tap at this time. We simply want to demonstrate that our government is serious about defending the vital economic interests of Alberta.”

The B.C. government challenged the bill in court after it was passed, but the case was tossed out because the bill was not yet law and there was nothing to legally challenge.

“We have been concerned about the constitutionality of that legislation since it was introduced in Alberta’s legislature. Our government is prepared to challenge it through the courts,” he said in a statement Tuesday night.

Deron Bilous, speaking for the Opposition NDP caucus, said Kenney’s proclamation will give B.C. a renewed opportunity to file a court challenge and tie the bill up in legal knots for years.

“You only proclaim legislation like this when you plan to use it,” said Bilous.

Kenney downplayed suggestions his government will cancel a cap on oilsands greenhouse emissions brought in by Notley’s government as part of its climate plan.

He said killing the cap is not part of his formal policy platform. And he noted the 100 megatonne ceiling is so high it’s not an immediate issue and the province has more pressing things to deal with.

Critics say the cap was part of a deal in exchange for Ottawa’s approval of the Trans Mountain expansion. Federal Energy Minister Amarjeet Sohi says cancelling it would open the door to more federal regulation in the oilsands.

Kenney’s UCP toppled Notley’s one-term government on April 16 by capturing 63 seats to the NDP’s 24. It was the culmination of Kenney’s three-year plan to unite Alberta’s Progressive Conservative and Wildrose parties, then win a mandate to govern.

He has promised to focus on creating jobs, particularly in the oil and gas sector, along with tax and regulatory reductions to spur investment and economic growth.

The new premier is also the minister of intergovernmental relations and appointed 19 others to cabinet, including seven women. He also named three associate ministers.

“This is a young, diverse, energetic cabinet,” he said. “I believe that amongst us 13 languages can be spoken. We have farmers, tradesmen, oil and gas experts, small business owners, academics, a musician, public servants and teachers. We even have some lawyers,” he said.

Travis Toews, a rookie member of the legislature from Grande Prairie-Wapiti, is the new finance minister. He was a chartered accountant and rancher before getting into politics.

Calgary lawyer Doug Schweitzer, who ran against Kenney for the UCP leadership, is the new minister of justice.

Veteran legislature members Ric McIver and Jason Nixon have also been given cabinet posts — McIver in transportation and Nixon in the key environment and parks portfolio.