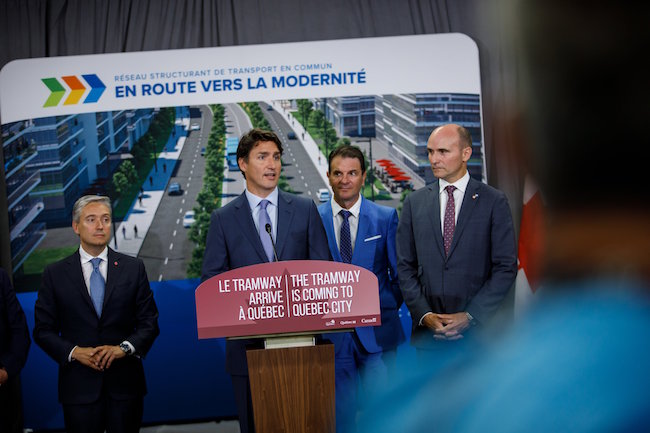 The Liberal government has been rolling out funding for nearly five years. PHOTO: PMO

OTTAWA—The Liberals’ signature infrastructure program became a target in the House of Commons Jan. 28 as the Conservatives used their new sway in a minority Parliament to try to force an audit of the multibillion-dollar program.

The Conservatives have harshly criticized the government’s plan for roads, bridges, transit and water systems in municipalities large and small, slated to cost more than $180 billion over a decade.

Money has been moving out of the federal treasury more slowly than anticipated, sometimes because of issues beyond the government’s control.

The Conservatives put forward an opposition day motion to instruct the auditor general to review the program and report back in a year.

The auditor can heed parliamentary requests for audits that aren’t already planned, but can also choose not to.

Conservative MP Matt Jeneroux said the Liberals have so far only talked a good game about helping cities improve and expand their aging infrastructure.

“We’ve seen time and time again that this government says that they’re building a lot, but we just don’t see the actual projects on the ground, or shovels in the ground,” he said Tuesday. “So what we want to do is involve the auditor general to do a full review.”

Infrastructure Canada data shows that to date, more than 52,000 projects have been approved across dozens of programs, worth more than $57.5 billion in federal funding. Of those, 38,810 of them are underway, and federal coffers have paid out nearly $22.7 billion for them.

Conservative Leader Andrew Scheer said few of the promised dollars in Liberal spending have actually rolled out the door for trade and transportation projects, focusing his criticism on one part of the sweeping infrastructure plan that is spread multiple departments.

“We got projects built. We balanced the budget and we cut taxes for Canadians all along the way,” Scheer said during the afternoon question period.

Prime Minister Justin Trudeau said the spending promised over a 10-year period has helped grow the economy and improve the quality of life for Canadians after years of under-spending by the previous Conservative government.

“Many Canadians remember with regret the Conservatives’ infrastructure plan that features things like billboards, and doorknobs and, yes, gazebos,” Trudeau said in response to Scheer’s barbs. “We will continue to invest in the things that Canadians need.”