Shovel-ready infrastructure in B.C. gets $100M as part of $1.5B recovery plan 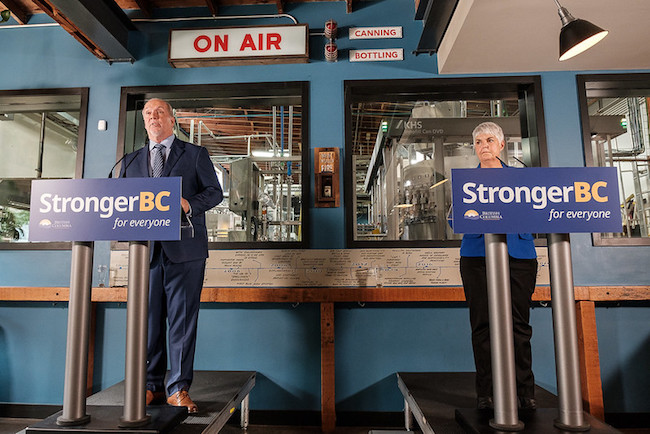 VICTORIA—The British Columbia government announced $660 million in new tax incentives Sept. 17 and outlined how it will spend another $1.5 billion on economic recovery from the COVID-19 pandemic.

The new details build on a suite of previously announced provincial and federal commitments aimed at recharging the economy as an uncertain winter looms.

“This recovery plan is just the start, the first step on a long road of recovery that we will take together,” Premier John Horgan said at a news conference with Finance Minister Carole James.

“We’ll continue to invest wherever and whenever we need to, to keep our economy growing and keep people safe.”

Members of the legislature across party lines unanimously approved funding for plan in March.

Details about how the money will be spent come amid speculation that Horgan is considering a snap election. He did little to dispel the talk of an election on Thursday, saying only that he had not yet made a decision.

It earmarks $417 million to support jobs and training, including $300 million to hire 5,800 new health-care workers in positions such as contact tracers and screening staff for COVID-19.

About $100 million in infrastructure grants will be available for projects that are ready to begin and there is $300 million in grants for small- and medium-size businesses to help protect more than 200,000 jobs in hard-hit industries.

It also dedicates about $100 million for the tourism sector, a significant shortfall from the $680 million the industry had asked for.

The tax incentives include a temporary 100 per cent PST rebate on select machinery and equipment for eligible businesses and a 15 per cent tax credit on eligible new payroll to encourage businesses to hire more workers.

The Greater Vancouver Board of Trade said it was pleased to see some of its recommendations in the plan, including the PST rebate. It said it looked forward to details about which companies would be eligible to access the payroll tax credit and small business recovery grant.

“These decisions will be vital to ensure that funds flow quickly to businesses that need immediate support to survive,” board president Bridgitte Anderson said in a news release.

“Since February, more than 8,000 businesses have closed in Metro Vancouver as a result of COVID-19 and many more are worried about a second wave.”

As of August, almost 250,000 jobs have been restored, equal to 62 per cent of the total jobs lost due to the pandemic, the government said.

Other provinces unveiled their plans months ago, he said, giving time for sectors like the tourism industry to respond during the summer months.

“This NDP plan is a huge disappointment simply because it is too little, too late,” he said Thursday.

“They’re trying to stoke election fever with an economic plan.”

Green leader Sonia Furstenau said her caucus was consulted on the plan and called it a good start, but added that it lacks imagination.

“We can dream bigger. We can strive to put every young person who needs a job to work restoring and healing our natural environment, begin a mass building retrofit campaign to create jobs in every community, and create a just transition for workers in dying industries,” Furstenau said in a statement.

The $1.5 billion builds on the $1.86 billion Safe Restart plan that was supported with federal funding.

The B.C. government says it has spent more than $8.25 billion in response to the COVID-19 pandemic.