RFQ to be issued this month for Calgary Green Line after city approves $4.9B plan 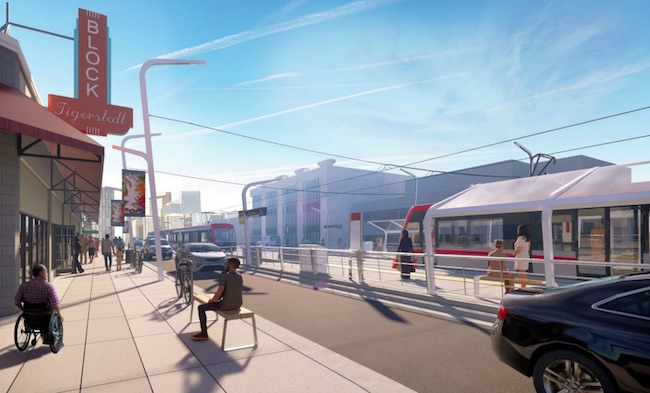 A rendering of the new light rail transit line that will run north/south. PHOTO: City of Calgary

Calgary City Council has signed off on several final adjustments to plans for the city’s Green Line and officially sanctioned the $4.9 billion light rail transit project.

The updated route for the line — known officially as the Stage 1 alignment — will take LRT passengers north/south from 16 Avenue N. to Shepard Station at the southeast end of the city. 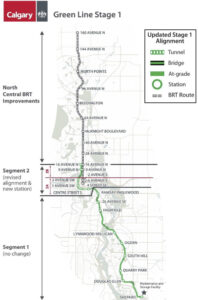 Click to enlarge. A map of Stage 1 of the Green line. PHOTO: City of Calgary

“Stage 1 builds the core of the Green Line long-term vision and will enable future incremental expansion as funding is available to realize the full benefits of the rapid transit network,” Michael Thompson, general manager of Green Line, said in a release.

The approved route includes 15 stations and will run about 20 kilometres over 10 bridges and through two separate tunnels. Later extensions could double the length and station count.

Compared to the previous Green Line plan, the realignment aims to trim building costs and mitigate certain construction risks. The total cost to build the initial phase of the LRT is expected to reach $4.9 billion, not including a $640 million debt servicing charge the city will incur to move the project forward. On capital costs, the city will spend $1.56 billion, while the federal and provincial governments will provide $1.64 billion and $1.7 billion, respectively.

Construction has been separated into three phases, starting with the southern-most section.

With the green-light from council, Calgary plans to move quickly into procurement. The city said it plans to issue a request for qualifications for the first stage of work this June and follow up with a request for proposals for qualified bidders next month.

Construction is expected to get underway next year.