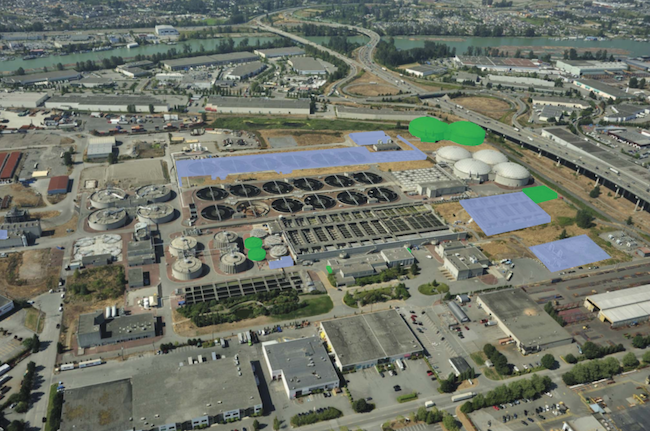 An aerial shot of the wastewater plant highlighting the first two phases of the ongoing expansion project. PHOTO: Metro Vancouver

Metro Vancouver has taken the next major step in its years-long project to upgrade the Annacis Island wastewater treatment plant in Delta, B.C.

The federation that oversees water and wastewater in the Vancouver area has awarded a $184 million contract to Pomerleau Inc. and Bessac, which is a unit of Soletanche Bachy and ultimately, France-based Vinci Construction. Metro Vancouver awarded the contract earlier this year, but Vinci disclosed the deal Oct. 16.

The Pomerleau Bessac General Partnership will be responsible for building a new outfall pipeline for the treatment plant on Annacis Island, a largely industrial island in the Fraser River southeast of Vancouver. The wider upgrade project, known as the Stage 5 Expansion, has been underway for several years and is expected to cost approximately $1 billion.

Among other stages of work, a joint venture between Aecon Group Inc. and Graham Group Ltd. are currently expanding the facility’s primary sedimentation tanks, solids contact tanks and secondary clarifiers to accommodate the area’s growing population. This $252 million part of the upgrade project got underway in 2017 and is expected to continue through 2021.

Construction of the new outfall system will overlap with the ongoing work to expand the wastewater plant that serves 14 municipalities across the Lower Mainland. Vinci said the project consists of digging two access shafts, each about 40-metres deep, as well as building two segment-lined tunnels 4.2-metres wide and 580 and 200 metres long. The tunnels will eventually house a new outfall pipe that will discharge treated wastewater into the river. Work on the the treatment plant’s diffuser and water control systems are also part of the project.

The piping and diffuser system is designed to discharge treated water from the plant across a large area of the river to maximize dilution and minimize any impacts on the environment.

Construction on the outfall is scheduled to wrap up by 2024.

Meanwhile, work on the final phases of the Stage 5 Expansion project will run until 2026. Metro Vancouver said it has yet to tender contracts for two new trickling filters and an associated trickling filter pump station; a new centrifuge; two new gravity thickeners; and a new maintenance facility.