Speech from the throne indicates provincial priority to focus on highways and transportation infrastructure. 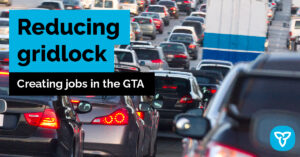 (Photo courtesy of Government of Ontario/Flickr)

Highways, transportation infrastructure, trades training and housing were some of the cornerstones cited in the throne speech delivered by the Honourable Elizabeth Dowdeswell, the Lieutenant Governor of Ontario, today at the Ontario legislature.

“Over the coming decade, Ontario is expected to grow by more than two million people. As it does, it has never been more important to invest in building transportation infrastructure,” she stated.

In the speech, she announced the government plans to spend $86.6 billion over the next 10 years to build and expand roads, highways and transit infrastructure in the province. This will include such projects as building Highway 413 and the Bradford Bypass, as well as widening Highway 3, rebuilding a stretch of Highway 101, and twinning the Garden City Skyway bridge along the Queen Elizabeth Way. It also includes the Ontario Line subway expansion in Toronto.

Looking north, the long-anticipated roadway to the Ring of Fire – described as one of the most promising mineral development opportunities in the world – appears to be moving forward, with the province being in the late stages of environmental assessment and design work for the first two sections of the roadway. Plans for the final road for the Northern Road Link connecting to the provincial highway system are progressing as well, with terms of reference having been received from the chiefs of the Webequie and Marten Falls First Nations.

“This ‘Corridor of Prosperity’ will not only bring economic growth and opportunity to northern and First Nations communities, it will also unlock the full potential of Ontario’s economy,” stated Dowdeswell.

“Your government is investing more than $1 billion in a skilled trades strategy to reduce the harmful stigma around the trades, particularly for women and young people, while expanding training opportunities to help build the most highly skilled workforce in North America,” said Dowdeswell. “This includes expanding three-year college degrees for in-demand fields and partnering with union-led training centres to provide people with the skills they need for new and exciting job opportunities.”

She also reiterated the province’s aim to build 1.5 million homes over the next decade. “With more housing starts in 2021 than in over 30 years, your government’s policies are working to get more homes built faster,” she stated.