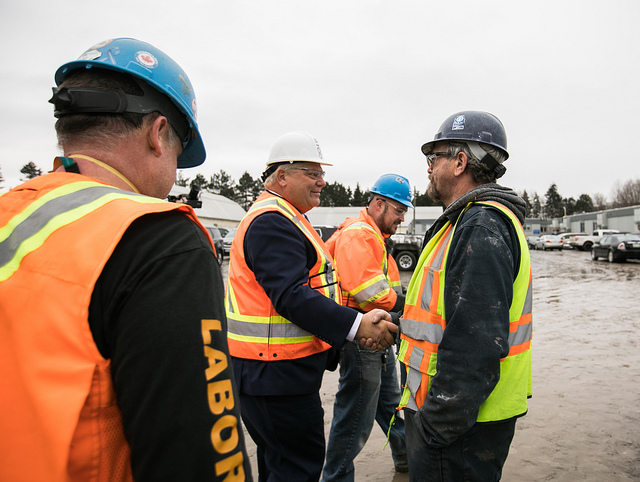 Ontario Premier Doug Ford tours a construction site in Toronto Jan. 8. The “upload” of the subway would put the province in the driver’s seat on future design and construction. PHOTO: Premier of Ontario Photography

TORONTO—Premier Doug Ford’s plans to take over Toronto’s subway system could begin to take shape this spring with the introduction of legislation that would start the complex process, the government said Thursday.

Transportation Minister Jeff Yurek said that while the Progressive Conservative have no timeline for how long it will take to deliver on Ford’s campaign pledge to take control of the city’s subways, the province’s special adviser on the takeover, Michael Lindsay, is meeting this week with city and Toronto Transit Commission officials to begin negotiations.

“It’s not going to be an easy process,” Yurek said. “But if we keep the commuter in mind at the end of the day it’s going to be something that will benefit not only the region but all of Ontario.”

The minister said the upload will mean the province would take ownership of the subway system, including its tunnels, tracks, and stations, and co-ordinate the construction and design of new additions, including any stations or routes. The TTC would retain the day-to-day operations of the subway, buses, and street cars, while the city would keep fare box revenue.

The province appointed Lindsay, who has worked on several public infrastructure projects, in August to head up a three-person panel that would make recommendations on the upload. Yurek said the government’s plan will shift costs from Toronto to Ontario taxpayers but he argues the move will benefit the whole province.

“Ensuring that the TTC is integrated in the system to get products, goods and people moving, it’s going to benefit Ontario as a whole,” he said.

Yurek said the government will build up the capabilities of the provincial transit agency Metrolinx to ensure it can take on the work of building new subway lines.

“Even Mayor (John) Tory has previously said that the TTC is not the best at bringing on new lines and services,” he said. “We believe the province had a better opportunity through Metrolinx to build and design new stations and routes.”

Yurek conducted a series of interviews on the province’s TTC upload plans Thursday following media reports that Lindsay’s recommendations to the government would be kept confidential.

“There is no real secrecy going on,” he said, adding that many of the details of the talks between the province and Toronto will be discussed by city council.

“This whole scheme is looking more and more like the first step in a Doug Ford plan to sell off Toronto’s subway system,” Bell said in a statement. “Privatization would mean higher fares, worse service and even more crowding.”

Toronto Mayor John Tory said he takes the Ford government’s promises to provide a transparent process “at their word”.

One Toronto councillor suggested the city should not participate in talks with the province if all information is not made available. Coun. Gord Perks also questioned the premier’s knowledge of how the city’s transit system operates.

“During his tenure on Toronto city council, Doug Ford showed himself to be the least knowledgeable member on council about public transit issues,” he said. “He’s got nothing to brag about there.”

Matti Siemiatycki, a University of Toronto associate professor with expertise in transportation planning, said there isn’t currently enough detail in the government’s plan to know if it will be a benefit. The danger it could represent is if it severs any connections between the TTC’s subway network with its buses and streetcars, he said.

“The TTC, and transit generally, works when all of the different modes within the network are integrated so you can transfer easily from the subway to a bus to a streetcar,” he said. “The TTC is truly world class in the way the different parts of the system are integrated.”

Siemiatycki said as the debate moves forward more information needs to be communicated with city politicians and the public.

“To move this quickly, and without information in the public domain to have that deliberation, that could be a challenge,” he said.