August 6, 2019 by Jordan Press and Andy Blatchford, The Canadian Press 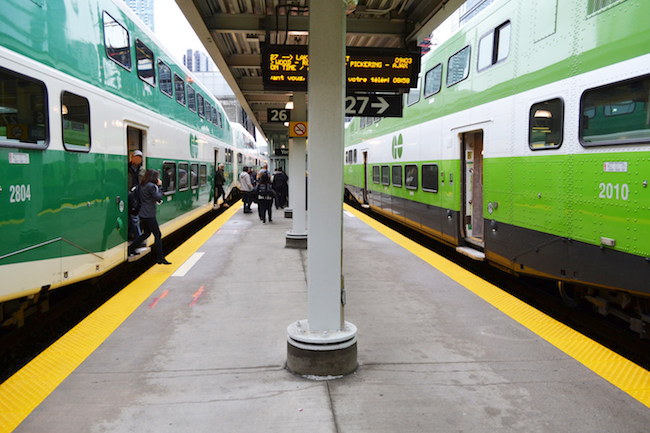 Debt financing for Ontario’s GO Transit expansion is one of several investments the bank has already made. PHOTO: Canada Infrastructure Bank

Pierre Lavallee said staff at the Canada Infrastructure Bank are trying to block out the electoral debate about the agency’s future to avoid getting distracted from delivering on the agency’s mandate to find new ways to finance projects and ease the strain on the federal treasury.

The Liberals created the government agency just over one year ago and infused it with $35 billion in federal financing to entice private sector investors to help fund new water, transit and energy projects nationwide.

Conservatives and New Democrats have been explicit in saying they will dismantle the agency if either is elected to govern after voting day on Oct. 21. The government, on the other hand, has been keen for the Crown corporation to show some progress in its work, internal documents suggest.

The agency’s public announcements will cease during the formal campaign, which could be just weeks away, giving the bank one more month to demonstrate its worth before voters go to the polls.

In an interview this week, Lavallee avoided weighing in directly on the political firefight. Focusing on political discussions for the agency is “just not productive,” he said.

“If we get distracted by that, even if it’s the same government, same formula, same people, same players, we’ll have lost whatever time we lost getting distracted.”

The potential distractions are everywhere. The Globe and Mail first reported that the agency’s head of investments resigned last month; more recently, the agency made headlines after documents, first obtained by the online outlet Blacklock’s Reporter, showed a consultant had crafted lists detailing which journalists had been producing negative and positive reports about the bank.

Behind the scenes, Lavallee said the agency has had conversations about 140 or so projects in its first year and has allocated about 10 per cent of its funding. Governments are at least willing to explore options through the bank, he noted.

“Working across the country with all the provinces and territories, they come from all parties, and regardless of party, we’re having really good discussions,” Lavallee said.

A briefing note late last year to the top civil servant at the Finance Department noted that the bank should be encouraged to publicly detail projects it was eyeing as a showcase for potential investors, and that its “risk appetite should align with the government’s expectations.”

The document also said that the government “anticipates that concessional financing from the CIB is required” to meet the Liberals’ goal of creating an incentive for private money for projects, meaning providing financing sometimes at below-market rates.

The Canadian Press obtained a copy of the document under the Access to Information Act.

The agency’s latest corporate plan notes the risk of not bringing in enough outside money, or spending its own capital, as potentially impacting its reputation. There are also risks like changes in interest rates that could affect its bottom line, which the document said the agency regularly looks to mitigate.

Of the $35 billion in financing, the government has banked that it won’t make back $15 billion, which Lavallee said was a result of accounting for charging interest rates with returns below what the market could get, even if the initial loan is repaid.

“Rather than taking less risk because the returns are going to be lower, in fact, in some cases we have to take more risks and lower returns, which for a traditional investor is pretty different,” Lavallee said.

“There’s no need for taxpayers’ money to be chasing around transactions or investments that the private sector will line up for. And all we’d be doing is displacing that.”

Last week, the bank unveiled its latest agreement to work with the city of Richmond, B.C., to expand the municipality’s energy system. The agency’s role is to help design the project in a way that would attract private sector money.

There will be more announcements as August rolls on, Lavallee promised.

He said he sees the work in Richmond as similar to a smaller investment the agency made in Mapleton, Ont., a few weeks earlier to help find a private investor to finance and operate that city’s water system — a model that could be replicated across the country.

Before that, the announcements were fairly large, including a $1.28 billion loan to Montreal’s electric-rail project, and up to $2 billion in debt to expand GO Transit’s rail network around Toronto. In late June, the agency also decided to spend $55 million to help Via Rail attract private money for its high-frequency rail project, which the agency could invest in further depending on the business case for it.

“I think we’re demonstrating really clearly that we can be relevant to every municipality, township and large city in the country,” Lavallee said.

“We can now have very clear proof points that we can point to to say, ‘We’re doing what we said we would.”’