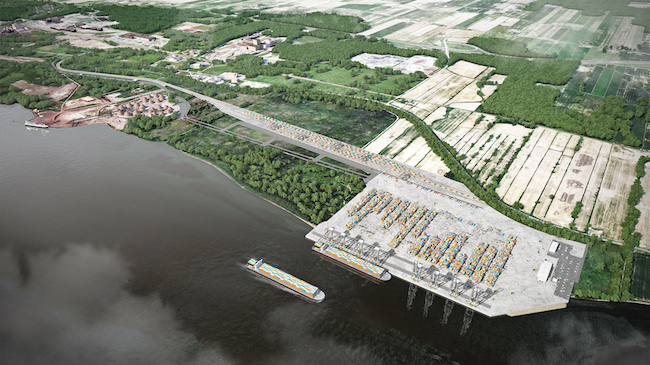 A rendering of the new container terminal upstream from Montreal in Contrecoeur. PHOTO: Port of Montreal/Twitter

MONTREAL—The Canadian Infrastructure Bank is pledging up to $300 million in financing for a new container terminal project at the Port of Montreal, though regulatory approval is still pending.

The project’s total cost estimate runs between $750 million and $950 million, depending on how much of the site a future private operator chooses to develop.

Sylvie Vachon, chief executive of the Montreal Port Authority, says the hefty commitment will help attract private investors, adding that to not increase container capacity “would be like putting a kind of ‘no vacancy’ sign at the port gates.”

Though construction is scheduled to begin in 2021 and the terminal is expected to open in 2024, the Impact Assessment Agency of Canada has yet to give the green light. Assuming the project moves forward, it’s expected to create as many as 5,000 jobs during the construction phase.

The port authority says the terminal — which will sit upstream from Montreal in the city of Contrecoeur — will add about 1,200 trucks a day to local traffic and two or three ships a week on the St. Lawrence River at the outset, and much more if the terminal reaches full capacity.

Freight traffic at Canada’s second-largest port rose nine per cent in 2018 to the equivalent of more than 1.6 million 20-foot containers for the fifth straight year of record volumes, prompting concerns the docks will be overloaded by 2022. The Contrecoeur terminal would add capacity of 1.15 million containers.