In response to contract threats from the province, the construction firm says Alberta has crippled the project with slapdash planning and scope changes 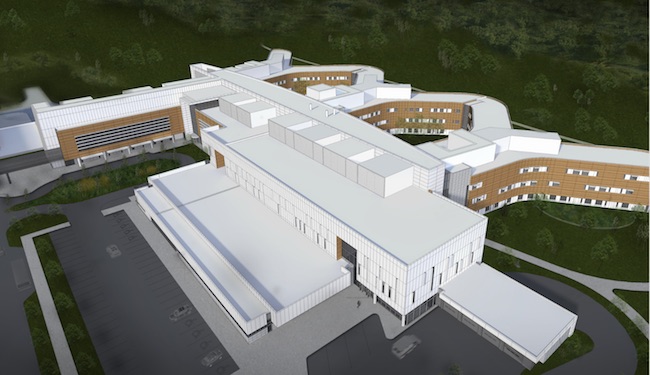 A rendering of the new hospital. Construction work is now about 70 per cent complete. PHOTO: Alberta Health Services

EDMONTON—The construction firm fighting with the Alberta government over the Grande Prairie Regional Hospital says the province has crippled the project with slapdash planning, poor budgeting and bad faith negotiations.

In a statement, Graham Construction said Alberta Infrastructure has been ordering so many design changes that completed work has had to be torn down.

“Until the scope changes stop, and sufficient budget is provided, no construction manager can properly establish a final cost or properly plan and complete the project,” said Graham.

The company sent the statement in response to a demand issued July 30 by Infrastructure Minister Sandra Jansen on the $763-million hospital.

Jansen said the Calgary-based firm is on track to miss the completion deadline at the end of this year, and has asked the province for an extra $120 million with no justifiable reason.

She has given Graham until Aug. 22 to deliver a plan to get the project back on schedule or see its $510-million contract cancelled.

But Graham, in its statement, said it had previously warned the province that the hospital couldn’t be done under the current budget given the design changes.

It said that since December 2016 the project has experienced more than 600 change orders and more than 400 design clarifications. There were 63 design changes and 34 new scope clarifications in June 2018 alone, it said.

Graham said it has been trying to work with Jansen’s office in recent months only to see meetings cancelled and not rescheduled.

It said Jansen’s claim of a request for an extra $120 million is false.

Graham said it had warned the project could be up to $85 million short and, at the request of Jansen’s office, put in a recent estimate to complete the project that included a $35-million contingency fund—two figures that would equal the $120-million ask.

She said the province and Graham renegotiated the hospital deal in December 2016, and last month’s $120 million ask was a trigger for the dispute.

“On July 24, we received a request in writing for an additional $120 million over and above the existing $510-million agreement without any documentation explaining the request,” Jansen told reporters on a conference call Thursday.

“That is really part of the reason that we issued the notice of default on Monday.”

Jansen didn’t take issue with the number of changes, but said such amendments are not unusual for a large project and none would have affected the bottom line or the timeline.

She dismissed the accusation her office is avoiding meetings, saying they continue to conference regularly at multiple levels.

She said she still hoped to get a workable plan from Graham by her Aug. 22 deadline.

The shell and roof of the hospital have been completed, along with insulation and windows. Construction on the inside is 70 per cent done.