EllisDon and PCL shortlisted for $1.9B Vancouver hospital project 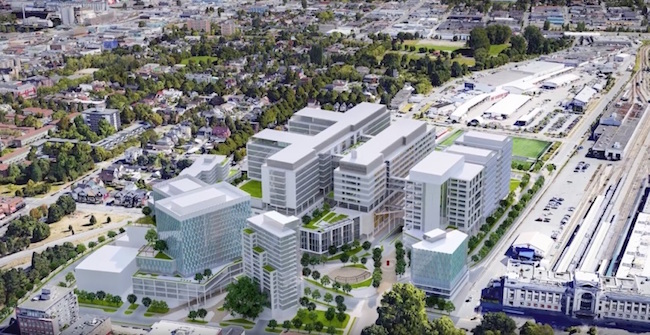 A rendering of the new hospital to be built on a 18.4-acre site on Station Street just east of Vancouver’s downtown. PHOTO: Providence Health Care

Two familiar names have been shortlisted for a major hospital project on Canada’s West Coast.

The new health care campus will replace the existing St. Paul’s Hospital in the city’s downtown. Some of the buildings on the current site are more than a century old and the aging facility does not meet modern standards, such as seismic building codes.

“Selecting the people who will eventually design and construct the new hospital is a key milestone to propel the project toward construction,” Adrian Dix, B.C.’s minister of Health, said in a release. “This is a once-in-a-lifetime opportunity to build a new hospital and integrated health campus from the ground up that will serve the health-care needs of British Columbians for the next 125 years and beyond.”

Currently a sprawling parking lot, the site of the new hospital in False Creek Flats is one of the largest undeveloped plots of land left in Vancouver. The 18.4-acre locale on Station Street is about three kilometres from the current hospital. Earlier in the process, planners opted to build the facility on an entirely new site as opposed to attempting to rehabilitate the existing hospital.

Construction on the project is scheduled to get underway late next year and crews will likely take until 2026 to complete the new hospital. The main building is expected to top out at 11 storeys and include 548 beds for acute care patients. The build team will be responsible for the design and construction of the new facility.

Auxiliary buildings dedicated to out-patient and specialty clinics, research programs and life sciences businesses, among other services, are expected to be added at later stages of the health campus project.

As procurement advances, the site of the new hospital is progressing through the City of Vancouver’s rezoning process.

The province and Providence Health Care are planning to pick a winning bidder for the project late next year with construction scheduled to start shortly thereafter.

A breakdown of the two teams shortlisted for the request for proposals stage :