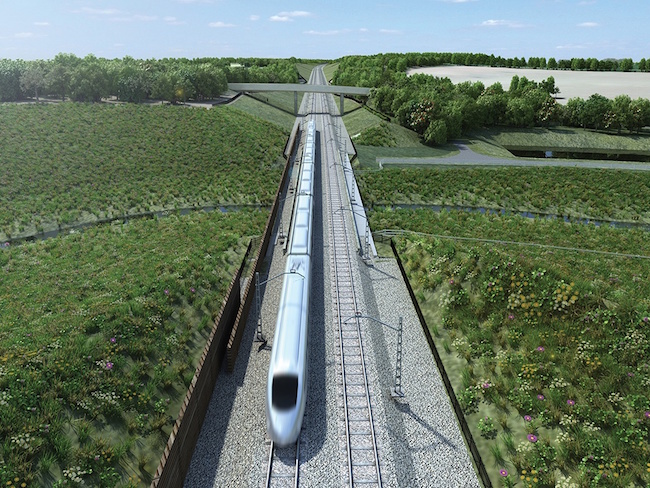 The line would span the 300 kilometres between Calgary and Edmonton with a stop in Red Deer. PHOTO: EllisDon

The two-firm partnership — known as Prairie Link — has put the project before the Alberta government under the province’s framework for unsolicited proposals. EllisDon said July 8 it has signed a memorandum of understanding (MoU) with the province’s Ministry of Transportation, allowing the Prairie Link team to work with the Alberta government to make the project a reality.

The roughly 300-kilometre route between Calgary and Edmonton includes a stop in Red Deer, and comes at an estimated cost of $9 billion.

“The notion of high-speed rail — a proven technology around the world — connecting Edmonton, Red Deer, and Calgary in Alberta is not new, but we believe that its time has come. We have built a team with both the capacity and faith in the future of our province to advance it in a meaningful way for Albertans,” said Jeffrey Hansen-Carlson, project director for Prairie Link, as well as a director with EllisDon Capital, in a release.

The use of high-speed rail technology contrasts with a Toronto-based company’s push to build a hyperloop between the two Alberta cities. TransPod signed an MoU with the province on the proposed project last summer and recently released a feasibility study it said showed the low air pressure transportation system could lower costs and emissions compared to flights and offer higher speeds than rail. The TransPod team aims to secure financing and start building a test track by next year, clearing the way for construction of a Calgary-Alberta hyperloop by 2025.

Prairie Link estimates the competing high-speed rail project could be finished in seven to nine years, with three years dedicated to planning and design, followed by six years of construction and commissioning.