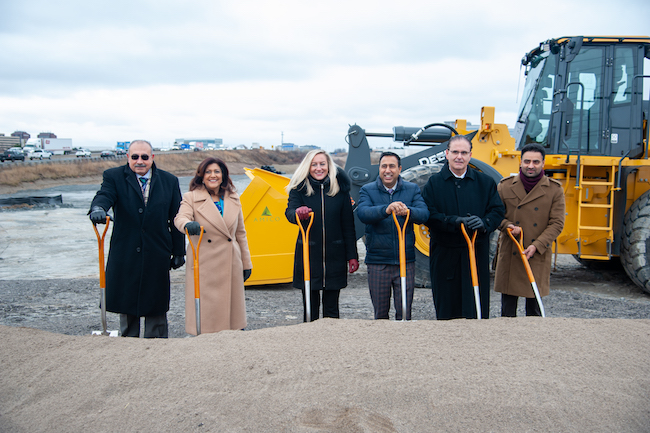 Then associate minister of Transportation, Kinga Surma (third from left) and other break ground on a highway widening project in 2019. PHOTO: Province of Ontario

Ford said the changes — which come less than a year before the next provincial election — were made as his Progressive Conservative government focuses on the province’s recovery from COVID-19.

“Our renewed team is well positioned to deliver on the priorities that matter to Ontarians, including getting more people back to work, making life more affordable, supporting businesses and job creators and building transit infrastructure,” he said in a statement.

Rod Phillips, who left his role as finance minister after travelling to St. Barts in December contrary to public health rules, was notably back in cabinet as the new minister of long-term care.

His vacation when the government advised against all non-essential travel generated a political storm that saw Ford criticized for not taking action when he first learned of the trip. Phillips called his excursion a “significant error in judgement.”

He now replaces Merrilee Fullerton, who was made minister of children, community and social services.

Fullerton has been heavily criticized for the havoc COVID-19 wrought on long-term care — 3,794 nursing home residents died from the virus and thousands more were infected. A scathing report published this spring found the neglected sector was unprepared for a pandemic.

Parm Gill took on the new portfolio of citizenship and multiculturalism, the first minister to head up the role.

Prabmeet Singh Sarkaria was made the new president of the treasury board, which was split from the finance file, while Lisa Thompson replaced Ernie Hardeman in agriculture, food and rural affairs.

Todd Smith was appointed to the ministry of energy, which split from Rickford’s former portfolio. Jill Dunlop, a former associate minister, became minister of colleges and universities, as Ross Romano moved to government and consumer services.

“I think it doesn’t restore faith for families who are looking to ensure that our long-term care system is going to be improved,” Singh said, who also criticized Fullerton’s new role.

“I’m very worried for families of children with autism, families with children in care. Are they going to get the support that they need?”

The provincial Liberals highlighted the retention of ministers who were key players in the government’s pandemic response, particularly in education and health.

“By leaving Christine Elliott and Stephen Lecce in place, Ford is rewarding the two people that share responsibility with him for one of the most incompetent responses to COVID-19 in the western world,” Liberal Stephen Blais said.

The union representing elementary teachers also criticized the decision to keep Lecce in his post.

“By keeping Minister Lecce in his role as minister of education, a minister who has not engaged with educators and their unions in a meaningful way since March 2020, Premier Ford has once again proven his disregard for public education,” it said.

Nelson Wiseman, a political science professor at the University of Toronto, said it was “disgusting” to see Phillips promoted back into cabinet after his travel scandal.

“If he had any honor, he would have resigned from the legislature,” Wiseman said.

Other changes like the promotion of younger, diverse caucus members suggest Ford’s government is in “election mode” ahead of the June 2, 2022 vote, Wiseman said, as former backbenchers can now return to their ridings with a cabinet tile to their name.

“In campaign literature, that can influence a number of people who might think, ‘oh, we got a cabinet minister in our riding, we should be voting for the government party, because maybe he can deliver something,”’ Wiseman said. “Everything is election mode.”

The lieutenant governor signed off on all the cabinet changes Friday afternoon. A swearing-in was held virtually.