Construction will get underway this summer alongside the Dempster Highway in northern Yukon on a nearly 800-kilometre fibre optic line that will connect Dawson City, Yukon and Inuvik, Northwest Territories.

The Yukon government said May 19 it has awarded a $67 million contract for the construction of the Dempster Fibre Line to ROHL Global Networks, in partnership with Dagoo Services.

The project, funded mainly by the federal government, has been in planning since 2018. Site prep began last year as Yukon finalized environmental approvals and permits. The 777-kilometre fibre line was fully signed off on early this year, the Yukon government said. 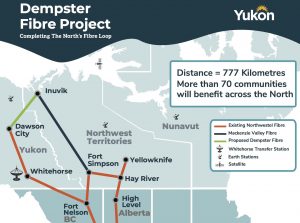 A map of the existing and new additions to the fibre network in Yukon and Northwest Territories. Click to enlarge. PHOTO: Government of Yukon

Nils Clarke, Yukon’s minister of Highways and Public Works, said the project will bring both jobs and economic benefits to northern communities.

“Investing in more reliable telecommunications and internet service for Yukon communities will help Yukoners participate fully in the digital economy,” he said in a release.

Yukon noted at least 20 per cent of the contract value will be subcontracted to First Nations businesses.

Construction is scheduled to start this summer and run through 2024.