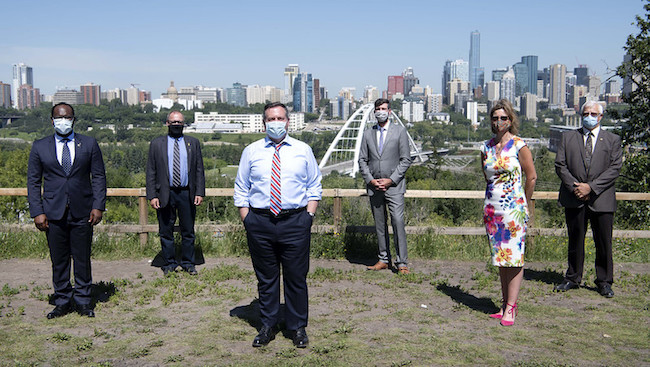 EDMONTON—Alberta municipalities that have been economically thrashed by the COVID-19 pandemic are receiving more than $1 billion in support from other levels of government.

The funds include $500 million in provincial money for shovel-ready infrastructure projects starting this year — part of Alberta’s multibillion-dollar recovery plan.

Municipalities and Metis settlements can start applying for funding to build roads, bridges and other infrastructure that would not have been built otherwise this year or next.

Alberta and Ottawa are also together contributing more than $600 million for municipal and transit operating costs under the federal-provincial Safe Restart Agreement.

Premier Jason Kenney says he knows these are eye-popping numbers that represent a lot of borrowed money.

He says this year’s provincial budget deficit is expected to exceed $20 billion.

“All of this will lead to a great fiscal reckoning. But right now, in the face of the deepest jobs crisis in nearly a century, we must prudently leverage the province’s balance sheet to diversify and to create jobs, to build and to ensure a strong economic future,” Kenney said Tuesday.

“Because if we don’t get people back to work, if we don’t restore investor confidence and get our economy growing again, the fiscal challenge will become insurmountable. So jobs and the economy must come first.”

A fiscal update is expected in about a month, Kenney said.

Edmonton Mayor Don Iveson said his city is expected to take a $172-million hit this year from rising costs and plummeting revenues, and has had to make deep service and staff cuts.

“This relief announcement is a validation of what mayors have been saying for months: That economic recovery itself is at risk in our communities without financial support for municipalities,” he said.

“A quick and complete recovery for our province depends immensely on the ability of our cities and towns and our counties to recover confidently and continue, especially in the big cities, to provide services like transit at service levels that reduce crowding.”

Calgary Mayor Naheed Nenshi said he’s always been proud that his city hasn’t needed outside support for its operating budget until now.

But he said Calgary is looking at a $400-million deficit this year and that it, too, has resorted to mass layoffs and service cuts.

Ridership on Calgary’s light-rail transit system was down as much as 90 per cent during the pandemic, Nenshi noted.

“But today’s announcement gives citizens the confidence that the three orders of government are working together, because we get through this the way we always get through things — and that is together.”