15 things to know about Canadian infrastructure

By The Boston Consulting Group  October 4, 2017 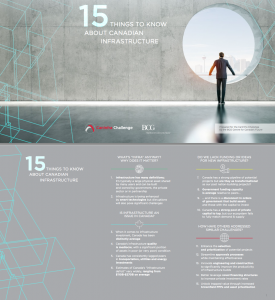 A new report from The Boston Consulting Group (BCG) says Canada’s infrastructure deficit sits at an estimated average of $110 billion to $270 billion, posing the need for both the government and private sector to pump in more investments to meet the funding gap.

Some other interesting data:

• Canada has consistently lagged behind peers in transportation, utilities and energy investments

• Government funding capacity in Canada is average relative to peers

• Canada’s infrastructure quality is mediocre, with a significant portion of assets in poor (or very poor) condition