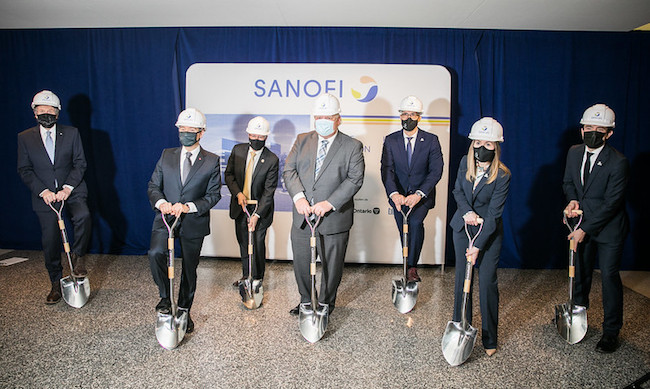 Premier Doug Ford, among other officials, at the project announcement. PHOTO: Government of Ontario

Innovation Minister Francois-Philippe Champagne said the federal government will spend $415 million in partnership with Sanofi Pasteur Ltd. and the Ontario government to build the new facility by 2027.

Champagne said the pandemic has taught all countries that they need to have domestic vaccine manufacturing capacity.

“When it comes to the next pandemic flu we should be self-sufficient,” he said. “If there’s one lesson learned from the current COVID pandemic it is that we need to have a strong Canadian biomanufacturing sector.”

The federal government said the new facility will have the ability to produce enough vaccine doses to support the entire Canadian population within about six months of the World Health Organization identifying a pandemic flu strain.

Champagne said that Sanofi chose Canada as the home of its new production and distribution centre after a global search.

Ontario Premier Doug Ford said his government will contribute $55 million to the project and Sanofi will provide more than $455 million.

The project will create 1,225 jobs and Sanofi will also invest at least $79 million a year to fund Canadian research and development.

The new facility’s work will include drug product formulation, fill-and-finish and inspection of flu vaccines.

Canada’s ability to manufacture its own vaccines and personal protective equipment has been a hot-button issue throughout the pandemic.

“We are now never going to have to rely on any country, any leader. We will be self-sufficient,” he said.

The CEO of CIFAR, a Canadian-based global research organization, lauded the federal and provincial governments for the announcement.

Alan Bernstein, who is also a member of Canada’s COVID-19 Vaccine Task Force, said securing further vaccine production capacity, even if it takes years to bring online, is vital.

“There will be future pandemics and so we we need to be ready next time and we clearly weren’t this time,” he said. “We need to have our own domestic manufacturing capacity so we’re not reliant on international supply chains for vaccines.”

Bernstein said the federal government has made a number of vaccine-related investments in recent months and it needs to think more broadly about how it can link them together to create a comprehensive plan.

“We now need a coherent, integrated strategy to make sure that these disparate separate investments really synergize with respect to each other,” he said.