Thousands to get vaccine at clinic hosted by EllisDon, Flynn and Modern Niagara 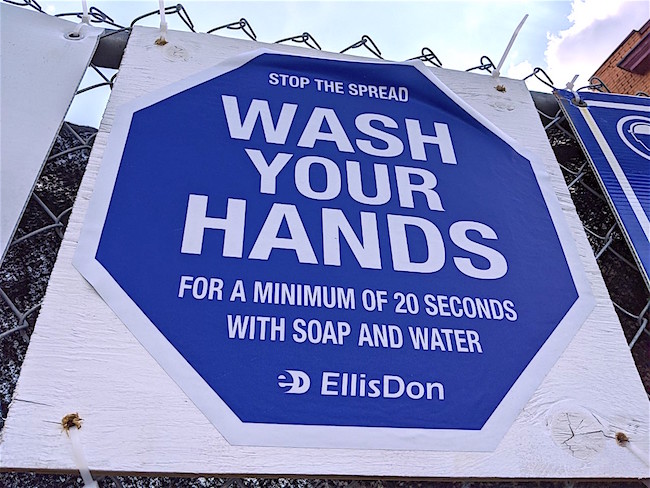 Along with the community clinic, EllisDon has been employing rapid tests on some of its GTA sites for months

Thousands of Ontarians are getting their COVID-19 vaccines not at pharmacies or doctors’ offices, but at a clinic pulled together by a construction company through a public-private partnership.

The clinic run by Mississauga, Ont.-based EllisDon has seen more than 15,000 people book appointments, scheduled between May 19 and 26.

“We’re completely full. And we just have families, kids, community all getting shots, and the emotions here are so high,” said Steve Chaplin, vice-president of health, safety and environment.

“It’s so powerful. It’s just such a great feeling for us as a company to be able to sponsor that.”

EllisDon is one of several companies running their own vaccine clinics. Others include Amazon, Maple Leaf Foods and Maple Lodge Farms, though those companies are not currently offering shots to community members.

Instead, some companies have said they’ll “sponsor” pop-up clinics at some point down the line.

Organizing such a clinic is something of a pivot for EllisDon, but making quick changes has become the norm for many businesses over the past 14 months.

From securing personal protective equipment to offering rapid tests and now vaccines, the company has had to adapt to stay operational during the COVID-19 pandemic, said Chaplin, who’s taken the lead on organizing the vaccine drive.

Initially, the company had planned to offer shots to employees and their families, he said.

“Our original thinking was, there’s not enough resources to get vaccines in arms, and we knew the supply was coming, so we started pursuing industry-led clinics with the province,” Chaplin said.

“What we thought we’d do is a heartfelt response to the community, to say, ‘All we want to do is get shots in arms and help people. So if you’re 12 and up and you can get here, let’s make a difference,”’ he said.

But getting to that point was no easy feat.

He said he had just over a week from the time the company was given the green light to operate the clinic to opening day.

“We were fortunate that we had two nursing companies that we were using to do the rapid testing,” Chaplin said. “But the key here is, we don’t have any medical staff with EllisDon. We’re a construction company, we build things. And so we just know how to get things done.”

EllisDon partnered with a couple other companies — Flynn, Modern Niagara and Central Ontario Building Trades — to pay for the whole thing, save for the vaccines, which were provided by the Region of Peel.

In addition to the nurses, they had to recruit an outside company that could handle the private health-care information involved in booking vaccine appointments and checking people in, he said.

Those who booked a vaccine at EllisDon’s clinic couldn’t do so through the provincial booking system or phone line, or through a regional website. Instead, they had to go to a different website, which they could learn about from media reports, social media accounts dedicated to sharing vaccine information or word of mouth.


Related Stories
Ontario, feds back construction of $925M Sanofi vaccine manufacturing plant
EllisDon named one of the Top Employers for Canadians Over 40 for third straight year
EllisDon expands western reach with purchase of PME Group of Companies
EllisDon teams up for “Walking In Someone’s Shoes” campaign