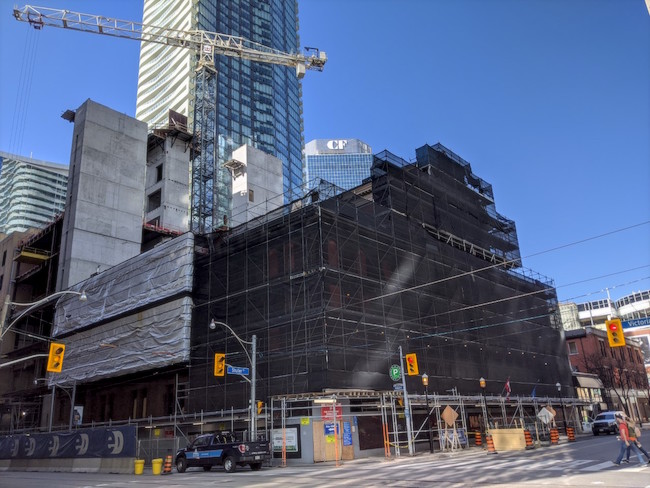 A scaffolding-covered Massey Hall in downtown Toronto. Crews were able to return to the revitalization project on the more than 125-year-old concert venue this week

Shortly after the Ontario government revealed plans last week to allow all construction to reopen across the province May 19, EllisDon gave notice that it would be restarting work on the long-running Massey Hall revitalization project in downtown Toronto.

As on other Ontario job sites temporarily vacated because of COVID-19, crews were allowed to resume construction at the iconic concert venue this week.

According to Gerard McCabe, the managing director for Canada at Turner & Townsend, construction was about half finished on the latest phase of work when contractors were forced to demobilize April 4. The consulting company is taking on the project and cost management roles on the renovation, which aims to breathe fresh life into the more than 125-year-old hall.

Given Massey Hall’s prominence and its busy location, McCabe said site security was likely the biggest obstacle when it came to safely pressing pause on construction. Knowing that the shutdown would be relatively brief simplified the process.

“That makes a difference when you’re trying to mothball a site for a few weeks versus a few months, or longer,” he said.

Work on the $142 million Massey Hall revitalization is expected to ramp back up in the coming weeks, as is construction on other stalled projects in Ontario and Quebec — which reopened its entire construction industry May 11.

The job sites to which workers are returning, however, won’t be mirror images of the ones they left six weeks ago. Across the industry, there’s a growing consensus that it will be a long road back to business as usual.

“It feels like we’re going through phase one of getting back to work,” McCabe said, pointing to the long tail of the pandemic and the need to map out what comes next.

“Right now it’s step one: get the guys back to work, get the construction sites going, get the economy going and then we’ll see what happens after that,” he said.

Even before work stopped at Massey Hall, EllisDon had adopted new protocols, such as physical distancing and revised construction sequencing, to prevent the spread of COVID-19. Other Canadian job sites have implemented similar measures and there’s no sign they’ll be lifted any time soon. McCabe expects the ripple effects of the safety regulations to hit productivity at every juncture — from the supply chain down to individual workers like drywallers who have no way to do their jobs and maintain two metres of separation.

In the field, coping with the host of new challenges starts with a proper action plan. 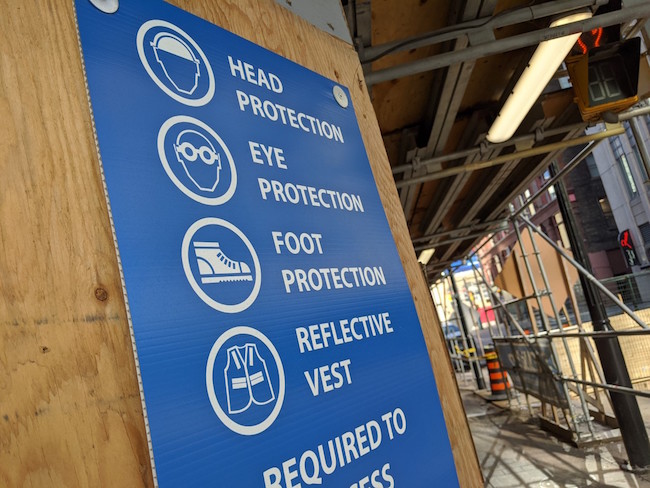 Conventional PPE, as well as additional protective gear, such as masks, will play a key role safely reopening the construction industry

Wade Gayowsky, executive vice-president of Stonerise Construction, said he spent days writing and rewriting policy early in the pandemic to ensure his more than 100 staff could safely continue work.

Stonerise was midway through a pair of new residential towers — a 22-storey building in Waterloo and a 15-storey tower in nearby Kitchener, Ont. — when the COVID crisis struck.

Gayowsky shut down construction near the end of March in anticipation of the province closing non-essential industries. Initially, the company expected to shut for two weeks and reopen in early April, but pressure from subtrades eager to keep working and Ontario’s decision to allow most residential construction work to continue through the pandemic, led Gayowsky to reopen the two condo developments shortly after they closed.

To limit the amount of staff on-site for the first five days back open, the scope was limited to structural work. Gayowsky said he used the week to perfect Stonerise’s health policies. Currently, the company is using an off-site pre-screening process that relies on forms submitted digitally to ensure workers are healthy before arriving on-site.

“We’ve also scheduled the work so there’s no two work crews, or two trades, on the same floor at the same time,” Gayowsky said. “If they cannot practice physical distancing, such as pouring a concrete floor or something like that, then all the workers are required to wear masks.” 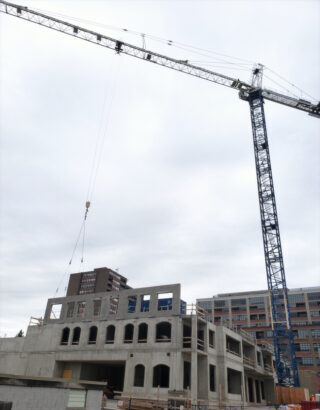 Among other steps, safety meetings have gone digital, stairwells are designated as either up or down and a cleaning company has been hired to sanitize high-touch areas, such as bathrooms and handrails, several times a day. Stonerise is also monitoring the tools it provides labourers closely, ensuring they are signed out properly and wiped down before being handed off.

After nearly two months with the new set of rules in place, Gayowsky said the buy-in has been good and the new approach has become “almost like” standard procedure.

At the same time, work on the two high-rises has not quite returned to full capacity.

“I’m still running a little bit shy,” Gayowsky said, noting that before COVID his crews would have been able to complete a concrete floor in about 12 days. Today, that figure is running closer to 14 days. He pointed to a small number of staff uncomfortable about returning to job sites as the main reason for the slower progress. Nevertheless, he anticipates getting back up to 100 per cent within the next couple of months — even if that means adjustments like masks for workers who have to work at close-quarters.

Others aren’t quite as optimistic.

“All the guys are going to have to get used to working in a different sort of environment and that’s not going to be easy,” McCabe said, pointing to the new set of on-site safety rules he expects to strain productivity.

McCabe sees the supply chain as another significant obstacle to a return to normal. Between foreign exchange rates, slow shipments and uncertain manufacturing capacity, he said the supply chain is “topsy-turvy.”

He anticipates many of the issues taking months to resolve.

Though Gayowsky said he has not had supply trouble to date, the company’s main needs at the moment are concrete and steel studs. Looking ahead as the project progresses, he said getting pricing for finishes has been slower than usual, which may not bode well for getting the materials themselves.

More broadly speaking, in a survey of Ontario ICI (industrial, commercial, and institutional) firms released May 25, the Ontario Construction Secretariat found six in 10 contractors were experiencing “medium to high level” supply chain during the mid-May polling period. With little change from a previous study at the end of April — which found 63 per cent of builders were having trouble getting the materials they needed — shoring up the supply chain is likely to be a protracted process.

The OSC survey also pointed to the considerable concerns builders have about shifting into recovery mode. The study found 86 per cent of firms are prepared to take on new shovel-ready projects, but more than a third expect it to take at least six months to return to business as usual, while nine per cent don’t expect to ever get there.

The return to work this week in Ontario will no doubt alleviate some of this pressure, but less demand as companies clamp down on capital spending looks likely to dampen the construction industry’s prospects coast to coast in what was previously forecast to be a strong 2020.

“I’m sure a lot of people are leery about spending money and moving forward until things settle down a little more,” Gayowsky said.

Infrastructure is one area all industry stakeholders will be looking to for support. McCabe, for instance, said he’ll be watching Ottawa and the provincial governments closely in the coming months as they work to get Canada’s economy back on track.

Quebec released a plan last week that will add $2.9 billion in infrastructure funding to its budget this fiscal year. The announcement May 16 follows similar moves from governments in Alberta, Saskatchewan and Manitoba over the past month.

Unlike Quebec and Ontario, which forced large portions of their construction industries to cease work, construction in Canada’s other provinces continued through the pandemic.

Across the industry though, new safety guidelines have disrupted standard operating procedure. On the prominent Site C hydro project in B.C., for instance, the workforce was cut in half to ensure the virus was kept under control. BC Hydro announced last week it has begun ramping back up, but the process is expected to take months, and additional safety measures, such as physical distancing, will remain in place.

Until COVID-19 is better contained, construction can count on a return to normal arriving later rather than sooner.