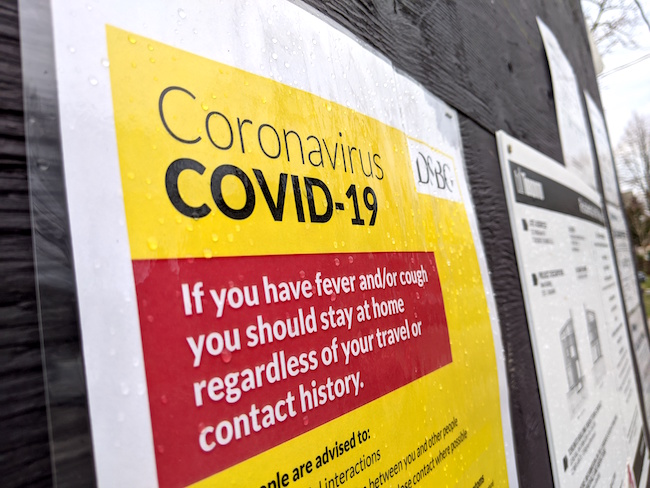 A warning notice posted outside a Toronto job site. COVID-19 has prompted the industry to tighten its health and safety practices

At most Canadian workplaces, running water and clean washrooms are a matter of course — rarely in doubt and rarely thought about. In construction, where job sites vary dramatically depending on scale, location and availability of services, basic sanitation remains a sticking point.

“I’ve worked for companies where trying to get a Porta Potti is like pulling teeth, to companies that have an actual washroom — you know heated, with the proper sanitation,” Julien Grant, a crane operator from Calgary, said.

“It’s one extreme to the other is what’s so frustrating,” Grant added, estimating he’s worked on over 100 job sites during the past 15 years.

Though hygiene has always been a concern for construction — with clashes over issues such as portable toilets versus washcars, and lax cleaning schedules on certain sites — more pressing issues typically top priority lists at both the management and worker levels.

“Sometimes, you know, things may slide by because everybody’s busy, but a crisis brings these sort of issues to everyone’s attention and they’ve got to get dealt with,” said Mike Yorke, president of the Carpenters District Council of Ontario.

With strict government orders to prevent the further spread of COVID-19, or coronavirus, having shut down non-essential businesses across Canada, sanitation has rocketed to the top of much of the country’s to-do list, including those in construction. In all provinces except Quebec, which ordered work stoppages last week, job sites remain active, meaning proper hygiene is more important to the industry than ever.

At times during the past two weeks, work has stopped and provincial health inspectors have been called, Yorke said. He pointed to instances of union members refusing work and situations taking a couple days to sort out. “Across the board we’ve seen some folks are being proactive, others are not being active enough and the response they’ve been offering has been driven by having people leave the site,” he said.

In Calgary, Grant also forced change by refusing work. At minimum, he said, he wanted a spot to wash his hands and clean up at the end of the day. That demand was met, and the contractor has also added hand sanitizer stations at the site, but Grant remains skeptical enough is being done.

In spite of the widespread closures in other sectors of the economy, in all provinces but Quebec, governments have not ordered construction sites to close. Within the industry itself, there is little appetite for mass shutdowns. Last week, the Canadian Construction Association advocated for work to continue so long as it’s safe and released a standardized set of safety protocols contractors should follow. Many local and regional construction groups have adopted similar stances.

“Our position is that compliant sites should be open and those that cannot consistently comply with measures and guidelines of public health authorities should shut down,” Mary Van Buren, the CCA’s president, said in a release.

At the worker and union levels, there has been some pushback.

Before Quebec Premier François Legault ordered sites shut down, for instance, FTQ-Construction and Conseil provincial (International) called for a two-week shutdown and cited more than 100 workers refusing to continue because of unsanitary conditions or a lack of respect for social distancing guidelines.

The Carpenters District Council of Ontario also called for a construction hiatus in Ontario March 23, though Yorke acknowledged safety protocols had improved across the province by the end of last week.

“It’s a two-way street,” Yorke said. “We do build the province and we build the wealth and the society that we all want to live in. At the same time, we need to be recognized as full human beings where we need to have safe working conditions.”

Similarly, Grant said he’s content to keep working so long as his job site is equipped to keep him safe.

“I don’t have a problem with it,” he said. “This is what I do, but protect us. Give us what we need to do our job safely so we’re not dragging this home.”

Among other protocols, the CCA is advising contractors stagger start times and lunch breaks, halt all non-essential meetings and amp up their cleaning efforts. Many large general contractors have already been implementing these and other measures on job sites.

Yorke pointed to high rise projects with hundreds of workers and a single hoist as one example. “That’s so difficult to maintain social distancing in that circumstance,” he said, adding that similar projects with a single active elevator are equally problematic.

To respond to lingering issues, the Carpenters District Council of Ontario and many other Canadian union groups, such as the Laborers’ International Union of North America (LiUNA), are stepping up outreach to ensure members refuse to work in unsanitary conditions.

Premier Doug Ford and Monte McNaughton, Ontario’s minister of Labour, Training and Skills Development, have also been vocal about the policy, calling on workers to file complaints with the ministry if issues aren’t resolved internally. On Monday, McNaughton noted on Twitter that a job site in the GTA was shut down March 27 as a result of poor sanitary conditions.

The challenging conditions and debates over possible closures span the country. On the West Coast, the BC Building Trades Council has stopped short of calling for a halt to construction, but is encouraging construction crews to speak up.

“It doesn’t matter if you are union or non-union,” Andrew Mercier, the group’s executive director, said in a release. “If [sanitation] is a problem on your work site, it is unacceptable. Tell us and we will continue to pressure WorkSafe[BC] to act. Health directives are helpful, but we need action. We know what the solutions are — we need compliance. Everyone has the right to refuse unsafe work, and we need to work together to provide a safe work site to get through this.”

While the coronavirus crisis has put job site hygiene top-of-mind across the industry, Grant and Yorke also hope the scrutiny will outlast the pandemic and lead to permanent change in the industry.

Coronavirus and its impact on Canadian construction