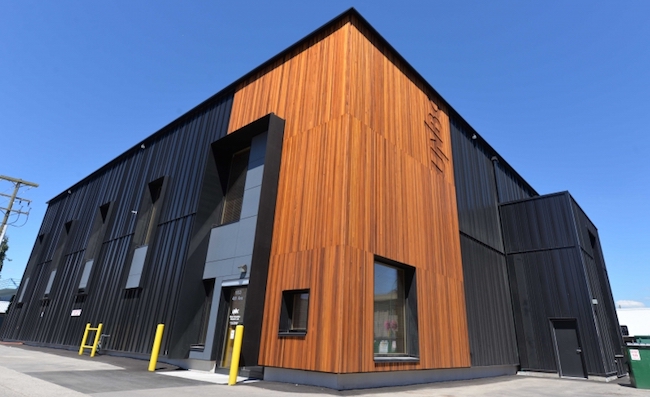 The new building cuts heating and cooling bills by up to 90 per cent, according to the chair of the Integrated Wood Design Program at UNBC. PHOTO: UNBC

PRINCE GEORGE, B.C.—The Wood Innovation Research Lab in Prince George, B.C., appears to be nothing more than a modern cedar and black-metal building, but look past the cladding and you’ll find an engineering feat that has earned it the recognition as the most airtight industrial building on the continent.

The University of Northern British Columbia building has received Passive House certification, making it the first of its type in North America to meet the internationally recognized standards for energy efficiency.

Guido Wimmers, chairman of the Integrated Wood Design Program at UNBC, said the building is very efficient and cuts heating and cooling bills by up to 90 per cent in a central B.C. climate where temperatures range from -30 C in winter to 30 C in summer.

“To get to Passive House standards in this climate, with this geometry, that was a big challenge and hasn’t been done, to the best of my knowledge. There are three or four industrial buildings worldwide,” he said.

There are Passive House organizations around the world advocating for high-performance buildings in design, construction and liveability. Thousands of Canadian homes have been certified by the group indicating they have met limits for heat, energy use and being airtight.

The research building is 30 metres by 30 metres, with walls that are a half-metre thick and contain blown-in mineral wool insulation.

Generally construction costs about five per cent more for passive buildings, but the university is the owner and it’s also interested in the operation costs, said Wimmers.

“The initial investment is higher, true, but the actually monthly costs of ownership are lower. And that’s always the goal. It has to be cost-efficient, otherwise nobody would do it.”

“A normal building of this type would have had a heating bill of $16,000, or something like that.”

The biggest challenge to obtaining the certification was a large overhead door that allows material to be brought into the research lab.

Wimmers said they brought in the big red door from Germany and had to optimize it even further to increase the air seal.

“Well, first you close the door,” he said, laughing as he explained how they got the seal. “Those bay doors are prone to leak. They are very well known for not being airtight.”

The other doors and windows in the building came from Poland, he said.

The B.C. Energy Step Code will set much stricter provincial regulations for housing energy efficiency and be in place by 2032, but the construction industry has been slow to catch on and manufacturers don’t see the value, he said. Some cities, including Vancouver, are already enforcing higher energy efficiency standards.

“The long-term goal is clearly not to keep on importing stuff. The goal is to create a local market so that local manufacturers can sell their inventions and new products.”

Wimmers said he’s been in consultation with several B.C. municipalities and companies about construction of more passive buildings.

The end result is all about comfort, Wimmers said.

“Imagine you have a power outage. Typical buildings would be almost unlivable in 10 to 12 hours or so. In a Passive House, you just don’t care. You can be there for days and days and days and most likely it is never going to drop below 15 degrees.”