Almost half of Canadians confused by environmental terminology 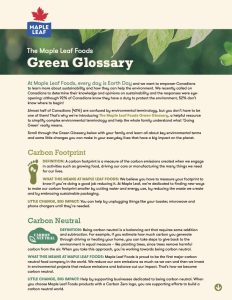 Maple Leaf Foods has created a Green Glossary resource to make it easier for Canadian families to learn more about sustainability and what they can do to help the planet. (CNW Group/Maple Leaf Foods Inc.)

For decades, Canadians have been bombarded with messages that paint a picture of a planet in distress, yet recent research reveals that less than half of consumers can accurately define the term carbon neutrality.

By building understanding, Maple Leaf Foods hopes to empower Canadians to act. The world’s first major carbon-neutral food company, it recently launched its “Little Changes, Big Impact” campaign along with a Green Glossary to make it easier for Canadians to learn more about sustainability and what they can do to help the planet.

The company launched the campaign after commissioning a study that revealed some disturbing figures. Although 92 per cent of Canadians know they have a duty to protect the environment, 52 per cent don’t know where to start and nearly half (42 per cent) are confused by environmental terminology, such as “carbon neutrality.”

“While Canadians have the best of intentions, our research reveals there’s a gap in knowledge,” says Tim Faveri, the company’s vice-president of sustainability and shared value. “It’s time to put pride aside, walk the talk and inform ourselves about technical terms.”

Maple Leaf Foods’ sustainability experts compiled a go-to Green Glossary which zeroes in on 12 environmental terms with high search volumes that it hopes will increase awareness and provide simple ways to look after the planet.