Trudeau commits funds to $3.8B SkyTrain spur from Surrey to Langley, B.C. 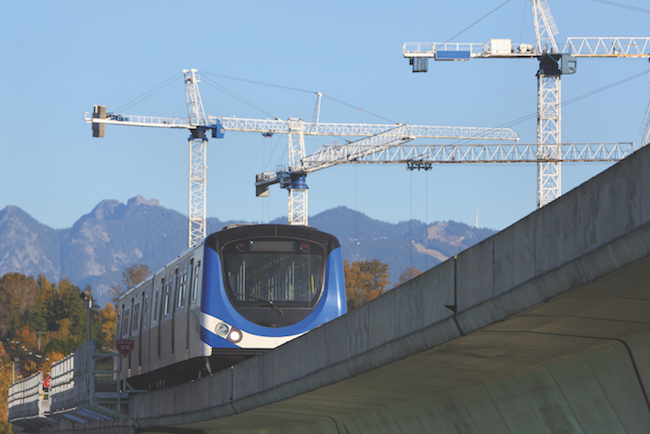 Costs for the Surrey Langley SkyTrain were estimated at $3.1 billion last year. The latest funding commitments indicate the bill may have risen to up to $3.8 billion. PHOTO: Getty Images/Maxvis

Trudeau made the announcement in Surrey with the existing SkyTrain line in the background as protesters from different groups shouted in the plaza behind him and a convoy of trucks circled the block with horns blaring.

“Nobody likes to be stuck in traffic when you could be home with your kids,” Trudeau said. “This will cut commute times and make your life easier. That means spending more time doing the things that you love.”

The extension would be 16 kilometres long and include eight stations, three bus exchanges and 30 more SkyTrain cars. It’s expected to cut transit time by 25 minutes from the existing bus route, officials said. TransLink’s website for the project indicates construction would take about four years.

Public transit is key to Ottawa’s plan for a clean recovery from the COVID-19 pandemic, Trudeau told the news conference.

“I don’t have to tell people in B.C. how important it is to continue accelerating our fight against climate change. Extreme weather and wildfires are only a few examples of the devastating consequences we’ve seen recently,” he said, referring to a wildfire that swept through the village of Lytton the day before Canada Day.

Trudeau announced federal government funding for a light rail line through Surrey in 2018, but a newly elected local council passed a motion months later cancelling the system in favour of a SkyTrain extension linked to other Metro Vancouver cities.

Surrey Mayor Doug McCallum pumped his fist in the air after taking the podium.

“It’s a great, great time, yes,” he yelled. “Today is a tremendous day for Surrey. We have been waiting a long time for the expansion of SkyTrain in Surrey.”

“This rapid transit project will connect people south of the Fraser (River) to more housing, employment, schools, services, encouraging higher density, mixed-use development all around the SkyTrain stations,” he said.

Surrey is one of Canada’s fastest-growing cities, with a population of about 600,000.

Trudeau, who was flanked by Infrastructure Minister Catherine McKenna, B.C. Premier John Horgan, McCallum and other politicians, said the project will create thousands of jobs and cut pollution.

Horgan said the extension will make a big difference in the look of the cities.

“What we’re going to be able to do … is not chase growth but help shape growth. That’s the transformative part about this announcement today.”

The B.C. government and other partners are funding the remaining costs of the extension of up to $2.54 billion, said a statement from the Prime Minister’s Office.

Trudeau also announced that the federal government has committed to funding up to 40 per cent of eligible costs for planning around the proposed extension of the SkyTrain line along Broadway in Vancouver from a station set to be built at Arbutus Street to the University of British Columbia.

That extension could save 40 minutes every day for people travelling to the university from the Commercial-Broadway station in east Vancouver, Horgan said.

“If you’re a student and you work a part-time job, every minute counts. If you’re a parent, you know how every day is a busy day, and this extra time will make a real difference.”

Trudeau made other campaign-style stops this week in Ontario, Saskatchewan and Alberta.