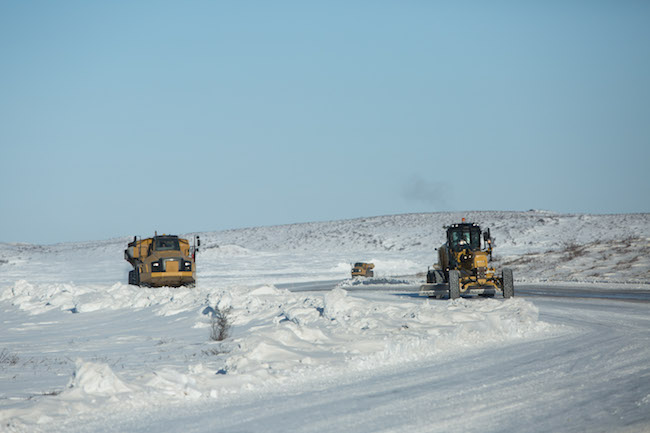 A recent roadbuilding project in another part of the territory. Infrastructure work has picked up in N.W.T. in recent years, but builders face significant obstacles. PHOTO Government of Northwest Territories

TORONTO—Northern leaders are cheering a federal funding announcement for a long-awaited all-weather road into the heart of Canada’s mineral-rich Arctic.

“This is a significant first step,” said Wally Schumann, minister of industry and infrastructure in the Northwest Territories.

The $5.1 million outlined at a mining conference in Toronto is a small fraction of the total cost that is expected to exceed $1 billion.

But Schumann said the money will pay for planning and development of the first part of the road, which could be under construction within five years.

A map of the proposed road east of Yellowknife. Click to enlarge

“It’s one of the richest regions in North America,” he said.

Building a road into the trackless tundra of the N.W.T. has been discussed since John Diefenbaker’s Conservative government in the early 1960s. The area is known to hold huge reserves of minerals from base metals to gold to diamonds.

A territorial study has suggested there are $45 billion worth of mineral resources in what is known as the Slave Geologic Province.

But without a dependable way to get in and out of the region — climate change is eroding the usefulness of ice roads — development has stalled.

A 2016 study found costs for mining projects are up to 170 per cent higher in the N.W.T. than in southern Canada. The N.W.T. and Nunavut Chamber of Mines suggests exploration costs are six times higher.

Studies suggest an all-weather road would be the best way to lower those costs. The territorial government believes it would also speed hydro development.

“Without infrastructure development, we will never be able to extract these resources,” Schumann said. “Not every deposit can you haul out in an airplane, like diamonds or gold.”

The entire two-lane gravel road is projected to be 413 kilometres long between Yellowknife and the Lupin gold mine on the N.W.T.-Nunavut boundary. It would pass literally dozens of known deposits, as well as skirt established projects such as the territory’s diamond mines.

The money announced March 4 is to go to planning the first 179 kilometres. It’s also intended to improve geoscience in the area, said Tom Hoefer of the Chamber of Mines.

“Filling in the blanks on the maps or taking them up to higher resolution is important to help companies be able to find more,” he said.

Hoefer compares the Slave region to Quebec’s Abitibi region, which has produced billions of dollars in mineral wealth.

Schumann said environmental concerns will have to be addressed. The road would cross the migration paths of major caribou herds.

Indigenous participation would also have to be worked out, he said.

“One of the things that I envision is Indigenous governments being part-owners of this road and they control access.”

That approach is already used elsewhere in the N.W.T., said Schumann.

Hoefer suggested federal interest in the project is long overdue. Notwithstanding the recent completion of a road link to the northern coast at Tuktoyaktuk, there hasn’t been significant investment since the mid-1970s, he said.

“That’s 40 years we’ve lost. There’s been a lack of vision from the federal government for a long time.”