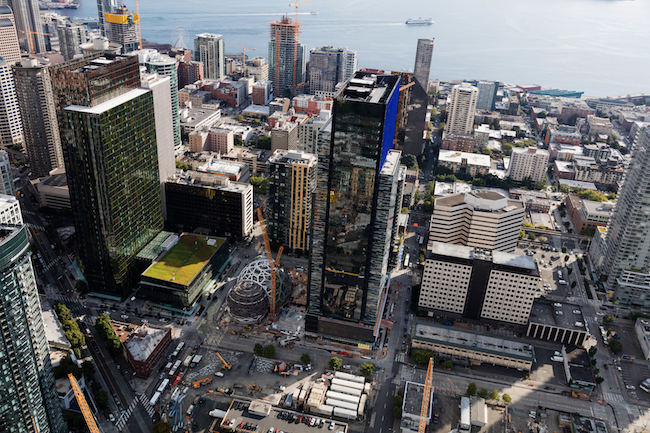 The company’s current headquarters in Seattle. The HQ2 project will greatly expand the company’s presence in the eastern U.S. PHOTO: Amazon

TORONTO—Amazon will be spreading its highly anticipated second headquarters over two North American locations, but confirmed Nov. 13 that it will not be calling Canada home.

The retail behemoth announced that its new main base—popularly dubbed HQ2—will be divided between New York City and Arlington, Va., putting an end to Toronto’s hopes of hosting the massive expansion that came with the promise of 50,000 jobs.

The joint bid from Toronto and surrounding municipalities was among dozens from Canadian cities eager to court Amazon, but the only one to make the company’s shortlist of 20 final contenders.

Canadian mayors involved in the extensive pitch said the effort represented a win even if the ultimate prize proved elusive.

“Our city is booming and this process has allowed us to tell that success story—the story of our tech industry and our ability to foster that industry—around the world,” Toronto Mayor John Tory said in a statement. “There is no other place in North America which can boast all in one location the same talent, the same quality of life, the same vibrancy and economic strength.”

Tory said Global Toronto, the company that co-ordinated the city’s proposal, remains in touch with Amazon to pursue “follow-up opportunities,” but provided no other details.

The mayor also said Global Toronto estimated the bidding process represented about $143 million in advertising value for the city, but did not say how that calculation was reached. Global Toronto did not immediately respond to request for comment.

The mayor of Markham, Ont., one of the municipalities involved in Toronto’s pitch, said making the final round of HQ2 competition was a significant victory.

“Toronto Region being shortlisted for #AmazonHQ2 is an incredible achievement,” Frank Scarpitti wrote on Twitter. “It shows the strength of our region and our diverse talent. Our reputation as an innovation hub is growing.”

Toronto’s bid, which billed the city and surrounding municipalities as a culturally diverse, safe and affordable hub for potential corporate growth, met many of the criteria Amazon laid out when announcing plans for a second headquarters.

The company had indicated it wanted to locate near a metropolitan area with more than a million people; be able to attract top technical talent; be within 45 minutes of an international airport; have direct access to mass transit; and be able to expand that headquarters to more than 740,000 square metres in the next decade.

In the end, however, the company opted to spread its resources more widely.

HQ2’s New York location will be in the Long Island City neighbourhood of Queens, while its Arlington offices will be located in an area called National Landing. Each site will get 25,000 jobs.

Amazon said it could spend more than US$5 billion to build its second headquarters over the next 17 years. The two locations combined would be about the same size as the company’s current home in Seattle, which houses 33 buildings, 23 restaurants and 40,000 employees.

In addition, the online retailer said it will open an operations hub in Nashville, creating a further 5,000 positions.

The decision ends an intense competition among 238 North American cities, many of which resorted to stunts to curry favour with the company.

Calgary’s irreverent campaign, for instance, dispatched city spokespeople to Amazon’s current headquarters in Seattle to erect a 36.5-metre by three-meter banner. The sign declared “we’re not saying we’d fight a bear for you ? but we totally would. ”

Other Canadian competitors, such as the Ontario cities of Windsor and Sault Ste. Marie, mounted bids with sister cities in Michigan while talking up the potential advantages of cross-border flexibility.

Amazon made it clear, however, that financial incentives like tax breaks and grants would carry more weight. Toronto’s bid did not contain any such measures.

The company has, however, been expanding its footprint in Canada in recent months—in July it announced a fulfilment centre in Ottawa and another in Caledon, Ont., that will bring more than 1,400 full-time jobs to Ontario. The company has nine warehouses in Canada and a technology hub in Vancouver that is undergoing an expansion.

—with files from the Associated Press