Crews to start work on Broadway subway this fall as B.C. firms up $1.73B contract 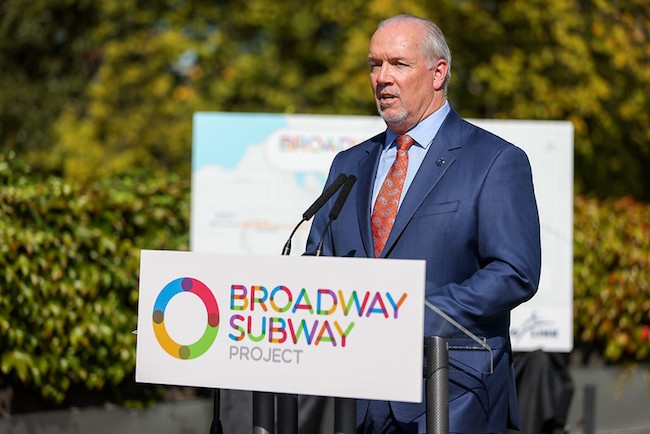 Vancouver’s Broadway subway line is one step closer to fruition with the announcement of a design and construction contract for the project.

British Columbia Premier John Horgan says work will begin this fall and the line will be in service in 2025.

He says the $1.73-billion contract has been awarded to the Broadway Subway Project Corp., an Acciona-Ghella joint venture. A full breakdown of the build team is available here.

The Broadway subway is a 5.7-kilometre extension of the city’s Millennium line, bringing it to the intersection of West Broadway and Arbutus Street with six underground stations along the way. The project requires digging twin tunnels with a diameter of 6.3 metres.

Michel Ladrak, president and general manager of the BC Rapid Transit Company, says the new SkyTrain line will alleviate pressure on the existing 99B bus line.

He says the Broadway extension will be able to carry more than three times the number of passengers than the bus, which is already the busiest bus route in Canada and the United States with 57,000 boardings a day.

“This announcement is the first concrete step toward completing this project,” he said.

Stewart said it will mean an estimated 14 million fewer cars per year on the road by 2030.

Horgan said the project will also help the province rebound from the economic blow of the COVID-19 pandemic.

“Major infrastructure projects like the Broadway subway line are key to our economic recovery,” he said.