Contractors making greater use of digital models as capabilities continue to evolve. 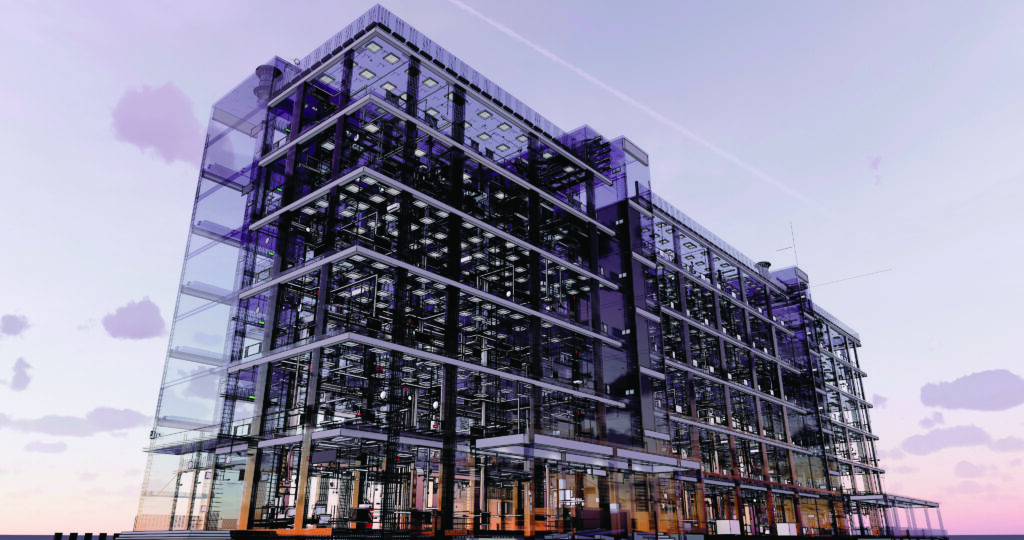 In late August, On-Site magazine hosted a panel of Virtual Design and Construction (VDC) experts to explore how 3-D models are currently being used in the building world, as well as how they are evolving in their capabilities and application.

In addition to providing advice about entering into this digital project workflow environment, panellists, Aaron Akehurst of PCL, Stephen Bianchi of Hatch, Hammad Chaudhry of EllisDon, and Steve Rollo of Graham Construction, shared insights into how their companies have been integrating such technologies as Building Information Modelling (BIM) and 3-D digital modelling into their projects.

They also discussed the evolution of these digital technologies and how the next generations of the platforms are looking to integrate jobsite and third-party data, which will open the door to more robust modelling in the years to come.

“All of our major projects are leveraging some form of VDC workflows,” stated Akehurst, explaining that the use of VDC and BIM may not be as prevalent on smaller projects, generally due to the time necessary to set each project up, but acknowledging that even smaller or specialty projects are becoming targets to take in the benefits offered with 3-D visualization and planning tools.

“The biggest thing that defines whether it makes sense to implement these VDC processes or BIM processes is the scope and the complexity of said scope,” added Rollo. “Five to 10 years ago, we might have looked to assign a dollar value of a project to define if we’re going to implement BIM or VDC processes on it. And while typically, the larger the dollar value, the more complex the project is, and the more benefit you would gain from these processes, that’s not always true.”

Using a basic but large warehouse and a smaller but more complicated renovation as examples, he illustrated how the smaller project and its scheduling and building system integration concerns would glean greater VDC benefit than the relatively basic design of the warehouse project that could be four-times the cost to build.

“I do believe VDC is a must for all major projects, as well as most minor projects, but it does depend on the scope and the scale of the job,” agreed Bianchi.

He explained that it wasn’t long ago that most of his company’s projects would be designed in 2-D, with VDC elements being designed from that step, if they were needed. “For some time now, we’ve been shifting away from the old traditions, and we’re pushing to generate our designs in 3-D.”

Going that route from the get-go offers such benefits as clash detection and the early identification of issues for more efficient resolution, but there are other benefits as well, he stated. “It also generates a very collaborative environment for the team.”

And companies are growing their digital teams to harness the benefit of having more experts and stakeholders weighing in at the planning stages. Not long ago, a BIM department may have consisted of a single digital expert who could provide insights when a BIM or 3-D question came up. Those departments are growing, and digital tools are making companies adjust focus. For example, Akehurst explained that his company is moving to take the idea of VDC and BIM to “move it to the centre of the project so that our entire project teams have access to the 3-D model.”

“I think a little bit of the shift is coming as upskilling of traditional project coordinators to be able to use those tools without having dedicated VDC folks,” explained Chaudhry.

“It allows a lot of the different disciplines to come together in a coordination model,” added Bianchi.

“We see almost tenfold greater success when the sub-trades are brought into it as well,” stated Rollo. “They’re the ones that are constructing on site… the more input we get from those people actually executing the construction, the better, in my opinion.”

Having a strong team is not the only key to success, however. Much like how a tower’s strength is dependent upon the quality of its base, when it comes to VDC, BIM and the use of digital twin technologies, the quality and format of the data can be critical.

“We still have to understand that there is a disconnect in the industry from a garbage-in garbage-out perspective, as far as what data we receive inside the model to effectively extract that data,” warned Rollo. “If those parameters aren’t specified at the right time, or if we, as the GCs, are not at the table at the right time to articulate what we would want to extract, that makes it very difficult to effectively and efficiently do those takeoffs properly.”

“Making sure of that similar work breakdown structure in your schedule and your model is critical,” explained Akehurst. “If you’re starting from two different places, you’re just going to be square peg-round hole for the entire project. You have to know where you want to go when you start your schedule and your model so that you can combine those two pieces together efficiently.”

Bianchi said that a major focus for him at Hatch has been “to try to ensure that these models are set up with trustworthy quantities, the right attributes, the classifications, so that it could feed into these types of systems and provide a little bit more automation and trust.”

His company has also been putting a lot of focus on data-rich models. “These models will contain many attributes built into the model, so it’ll be a lot more than just a 3-D shape,” he said.

Chaudhry also illustrated some of the benefits that modelling tools can offer when they extend beyond simply visualizing a project to bring more business-side attributes into the integrated plans – a theme that was extended on by the rest of the panel. “We have had clients and projects at EllisDon where we’ve done that cashflow analysis with the model and tracking. But again, that’s not commonplace,” he said.

When a time component is included in the digital model, some in the industry have suggested the use of the term 4-D, with the term 5-D being used to reference a cost management feature of an evolved digital modelling application, although much debate remains about the naming conventions used. Despite some disagreement on terminology, the theories at play do point to the growth potential that exists for VDC systems that rely on jobsite feedback from various inputs, including digital Internet of Things (IoT) sensors.

“The thing that we’re shifting towards a lot now is this overall idea of digital construction as opposed to just BIM or VDC,” said Rollo. “Because it encompasses so much more than things like drone capture and amazing scanning.”

“The naming convention, I don’t agree with, but the idea behind it, I think there are bits and pieces that are getting into the industry; maybe not at a Hollywood-level style, but definitely in terms of, ‘Hey, how do we get that in that process?’” said Chaudhry.

While it may be a little early to be relying on digital models to automatically track projects and forecast any costing or timing changes, the needle is moving, and many companies are starting to incorporate more advanced capabilities housed within some VDC software offerings, or at least exploring the ability to use such capabilities.

“The anticipation or the drive is there within the industry to want to leverage it for specific model-based quantity, takeoffs and everything like that,” said Rollo, although he warned that the ability to make effective use of the information is reliant on the quality of the data being measured and collected. “The drive is there for it, but I think it’s still in its infancy as far as finding out the best way to most efficiently execute,” he said.

The path to making effective use of data from a jobsite, said Akehurst, is going to be reliant on data structure and data standards. “I think that that’s the foundation that we need to be able to build out. Whether it’s connecting IoT sensors or tracking progress, or all of those kinds of things, we need that well-built data foundation to be able to connect.”

“Ultimately this goes right back to the beginning of when you have a project. ‘I have a plot of land. I want to come up with different design scenarios, and different methods of schedule execution…’ but with technology as the focal point,” said Chaudhry. “The evolution of VDC is not about how do we do 3-D coordination; it’s more about the sophisticated technologies that are trying to look at automated data capture to inform decision making.”

While this may look daunting for companies that have yet to dive into the VDC ocean, the panel offered some guidance to help contracting firms get started.

“My first piece of advice is start,” advised Akehurst. “The second piece would be… leveraging champions. One thing we’ve done at PCL, around when I started in this role, was we identified that we needed these technology champions in each of our districts. So, we created this role for that.”

“I think, the onus is on the GCs now to start to educate our clients about the different complementary construction technology around VDC and the evolution of how these artificial intelligence-based systems can start to come back and inform decisions,” said Chaudhry.

And while not all contractors have the ability to take on a full-time VDC or BIM expert of champion, Akehurst explained that finding someone within the company who could take on the task of exploring how to best leverage technology and BIM in a way that aligns with the contractor’s structure can only help as more and more projects go digital.

He also advised to not get hung up on the odd misstep along the learning curve. “Every single time we start a new project, we’re adding to what we already what we did on the previous project,” he stated. “We accept that it may not work on the first go-round. We’re going to learn on the next project or the next segment of work within that project.”

“If you’re not already engaged in leveraging these technologies and processes… I think one of the biggest things that I’d say coming from not only the GC end but from a previous life working for an implementation firm is, don’t anticipate doing everything at once,” said Rollo. “Take it in small chunks… Define your strategy and take it in steps. Understand that it’s going to be a journey, and it’s going to take some time to gain efficiencies on it.”