Underpinning Eglinton: The complex process to add a platform beneath one of Toronto’s busiest subway stations 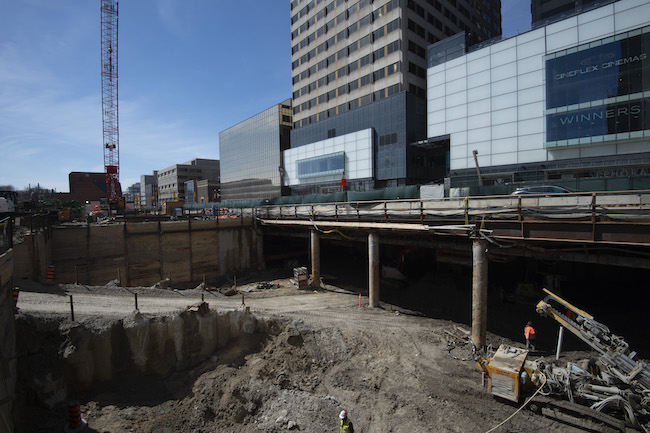 Vehicle and pedestrian traffic at the busy intersection have complicated construction. PHOTO: Metrolinx

Laying nearly two dozen kilometres of track along and beneath a densely-packed pocket of midtown Toronto has not been simple. Since pre-construction work began on the Eglinton Crosstown Light Rail Transit Project in 2011, crews have faced a steep series of obstacles — from tunneling under 10 kilometres of the busy east-west roadway, to excavating stations and erecting an intricate elevated guideway.

But few aspects of the project have been as technically challenging as work at Eglinton Station itself.

Already a major hub along the Yonge-University subway (Line 1), Eglinton will become one of three interchange stations on the new LRT line. This required adding a second platform below the current one. A complicated process known as underpinning was used, mandating that crews install massive beams capable of supporting the existing station during excavation.

To complicate the delicate process further, essentially all of the work was done during Toronto Transit Commission (TTC) revenue hours, meaning subway trains continued to roll through Eglinton as workers dug narrow pathways, known as galleries, beneath it.

“We would excavate basically a metre and a half deep and then we would shotcrete it and then we’d put some props in. Then we would move forward and do the same process over and over throughout the gallery,” says Geoff van der Lee, deputy project director and implementation director, for Crosslinx Transit Solutions, the P3 team responsible for building the LRT project.

A series of sensors had been set up to detect the slimmest of movements.

“That automatically sends notifications to the team if we’re seeing anything untoward happening,” van der Lee says. “Over three millimetres would trigger a suspension of the line while an investigation was done in case there’d been any undo movement and danger to the public.”

Through six months of gallery work, the trains never stopped. The monitors never picked up differential movement above 0.4 millimetres.

In late 2018, before crews got underground, heavy rigs on the surface at Yonge Street and Eglinton Avenue drilled a half dozen piles about 40 metres down that would eventually be used to support the existing station box. Underground excavation crews then approached the Line 1 platform from the sides, installing huge support girders on each side of the box.

With the two girders fastened to the support piles, the precision gallery work got underway. 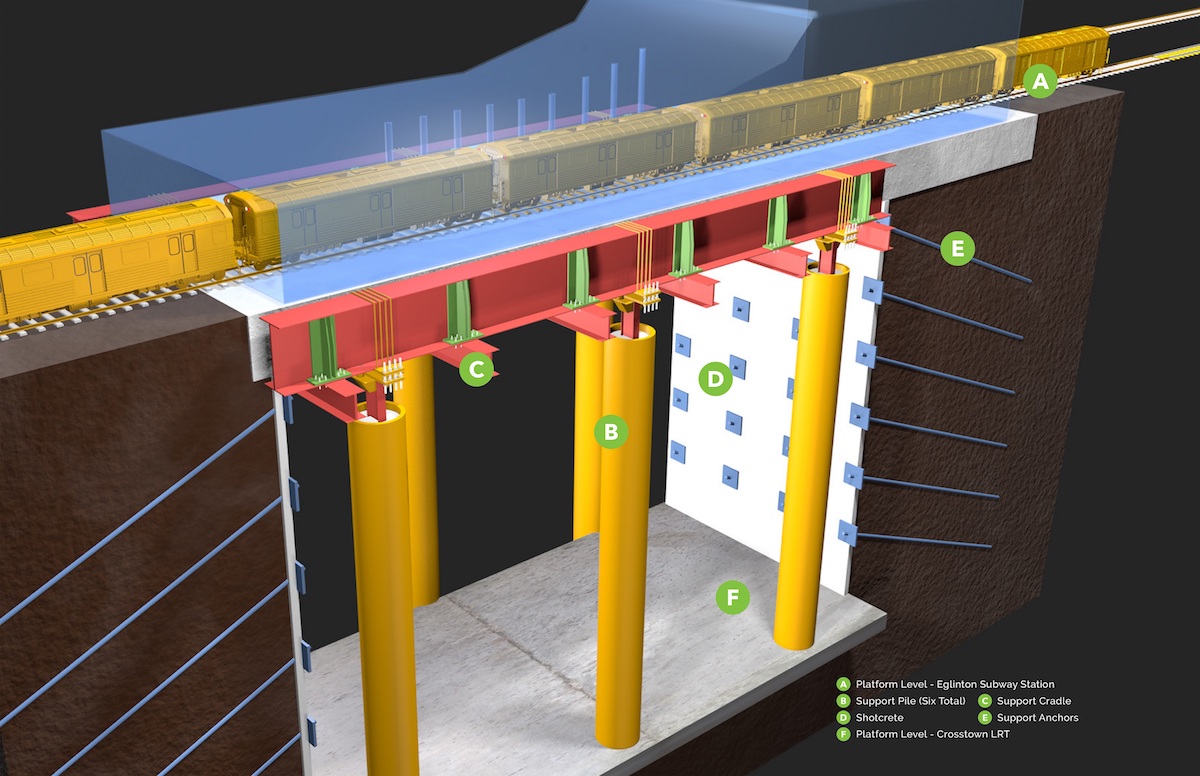 The main components of the underpinning process. Click to englarge. PHOTO: Metrolinx

It was slow going. Using walk-behind skid steers, crews dug out about 1.5 metres of earth at a time before spraying shotcrete, installing props and repeating the process.

“Once the gallery is complete, then we slide in what we refer to as a needle beam,” van der Lee says. The steel girder is then jacked up against the existing station box to support the load.

As is often the case on-site though, van der Lee noted, the work required some “bobbing and weaving.”

About halfway through excavation on the very first gallery, the team spotted deteriorated concrete in the Line 1 station box. Having been built in the 1950s, van der Lee said the concrete likely did not flow properly when originally poured, leaving exposed rebar. Because the degraded section would have been “directly bearing” on the needle beam, the team needed to work out a repair.

Crosslinx, which is made up ACS-Dragados, Aecon, EllisDon and SNC-Lavalin, consulted with the TTC to find a workable solution. Though the issue delayed work several weeks, crews patched up the old concrete and moved on with the project.

This May, after about six months of work, the sixth and final the needle beam was installed, securing the existing station and allowing the team to conduct excavation underneath.

Over the summer, crews completed the shoring and excavation process below the galleries, installing a series of approximately five-foot by five-foot panels on either side of the excavation. They carried out the work in a checkerboard pattern in order to avoid creating too large an opening.

“That could potentially cause a failure of the existing ground because obviously it’s under compression and we didn’t want to provide an opportunity for a failure to happen that would cause movement within the box,” van der Lee says, adding that tiebacks were then installed through the panels to stabilize the ground behind them. 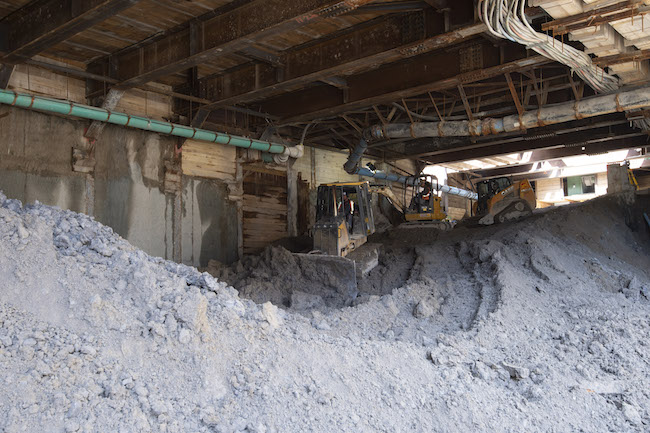 Construction crews have been working on excavating beneath the TTC box and at both the east and west ends of Eglinton Station. PHOTO: Metrolinx

At both sides of the excavation, workers are also making progress. “We’re down to invert level at the east and west end,” van der Lee says. “In fact, we’ve already poured the first inverts on the west end and we have poured the mud slab for the inverts on the east end.”

At about 260-metres long, the station will extend below Eglinton roughly between Duplex Avenue and Holly Street.

At Eglinton Station, crews are aiming to have the expanded station ready for the end of 2021.

Meanwhile, the team at Cedarvale Station — the other interchange station that required underpinning — has completed the underpinning process and begun pouring concrete.

“They’re now starting to work their way back up to grade again,” van der Lee says. “It’s a long way from being finished, but they’re quite further advanced.”

While the process at the station at the bottom of Allen Road was similar, van der Lee says the engineering specifics and soil conditions made the work simpler to complete. More space for access points and less vehicle and pedestrian traffic also simplified the process.

In total, the new Eglinton Crosstown includes 15 underground stations and 10 additional stops, from Mount Dennis in Toronto’s west end to Kennedy Station in Scarborough.
Construction on other aspects of the line has also continued to progress this summer despite the COVID-19 pandemic.

Currently, Metrolinx says the Crosstown is tracking for a 2022 opening. It was previously scheduled to open in September 2021, but citing delays early in the project that the team was not able to overcome, the provincial transit agency pushed back the timeline for the LRT project this February.