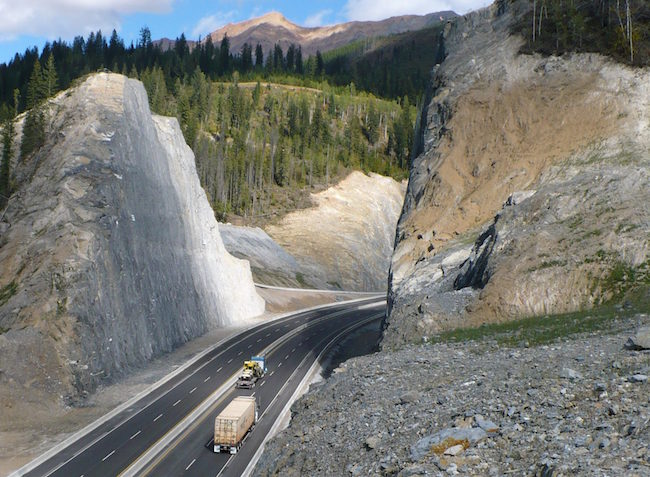 According to folklore, the scenic river and pass were named when Captain John Palliser was kicked by a horse during an 1850s expedition in the region. PHOTO: Government of B.C.

The Highway 1 pass through Kicking Horse Canyon, east of Golden British Columbia, is among the most rugged sections of the Trans-Canada Highway. Jagged twists and turns, steep embankments, towering cliffs and spectacular views make the route a magnet for tourists crossing the Rocky Mountains, with more than 10,000 vehicles daily during the peak summer season.

But the route is also a major commercial transportation corridor moving millions of dollars in goods to serve interprovincial and international trade. The combination of utility and beauty has commanded a steep price, with serious collision rates along a 26-kilometre stretch triple the provincial average for older two-lane rural highways. In 2003, the provincial and federal governments undertook to change that, embarking on one of Canada’s most complicated highway redevelopment projects. Three phases of work have since been completed, and it’s the fourth, final round now underway along particularly precarious terrain that stands to be the wildest ride of this road widening adventure.

Highway 1 had changed little since it was built in the 1950s, roughly parallel to the path the Canadian Pacific Railway charted in the 1880s, and the goal is to bring the roadway up to modern-day standards for 100 kilometre per hour traffic. Crews plan to widen two lanes to four, place a concrete barrier down the centre, upgrade rest areas and brake-checks, broaden shoulders to accommodate cyclists, and build bridges, ditches and retaining walls to reduce inclines and prevent highway-closing impacts from rock slides and avalanches.

The work done thus far along 21 kilometres of roadway is significant. During Phase 2, for instance, the 270-metre-long Yoho Bridge was redeveloped with a massive retaining wall designed to withstand impacts from boulders weighing up to 5,000 kilograms travelling at up to 125 km/h. Park Bridge, completed around the same time, is considered a showpiece with a tall, lengthy span rising from the valley below. 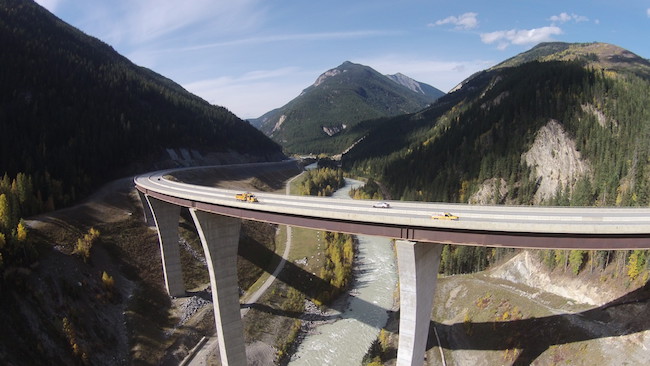 The Park Bridge over the Kicking Horse River was built during Phase 2 of the project. PHOTO: Government of B.C.

“It’s quite a striking feature,” says Mike Lorimer, executive project director with Transportation Investment Corp., the provincial Crown corporation overseeing some of B.C.’s biggest infrastructure projects, including this one. “It’s got these great big pillars and goes through a massive rock cut.”

However, the final 4.8-kilometres leads through the highest elevations, averaging 900 metres above sea level, and reaching 1,005 metres at its highest point. Lorimer characterizes the completion of Phase 3 nine years ago as essentially the winding down of all project work to make way for the unique challenges Phase 4 brings with the apex of Kicking Horse Canyon pass. He describes an awe inspiring landscape, with lofty rock cuts of fragile, fracture-prone limestone. “It’s spectacular, steep and rugged. The reason it was left until the end is because it’s the most challenging from a technical perspective.”

Planners have always had all four phases in mind, broadly speaking, but focused attention to Phase 4 really started in 2008 with feasibility and engineering studies exploring the viability of plans and components. This led to what Lorimer describes as a fluid design that acknowledges exploratory drilling and geophysics don’t always reveal the precise physical nature and peculiarities of the complicated, rocky terrain.

So, while Phase 4 calls for realigning 13 curves and attaching structures to the rock face, it’s understood there may be surprises. The five or six planned bridges will be simple enough, with no overhead structures, but the challenge will be anchoring piles and abutments into solid rock and constantly ensuring equipment is stable and safe. “This project is all about keying a road into a steep, rocky, unstable slope,” Lorimer says. “So, as they encounter different rock horizons and other challenges, they’ll be able to pivot and change their design fairly easily to adapt to ground conditions or ideas they may have as they get into it.” Planned features include protective walls and other safeguards to prevent rocks from tumbling towards rail lines below. And while planners considered tunnels, they nixed them due to cost and extensive health and safety features that would be required. 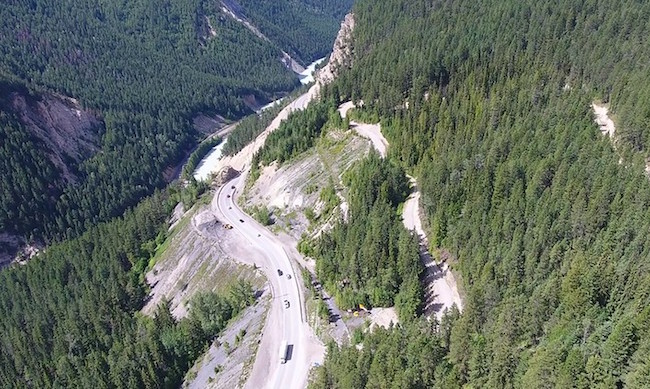 An aerial view of part of the route to be widened during Stage 4. PHOTO: Government of B.C.

As planning for Phase 4 picked up steam, an environmental assessment addressed potential impacts to water sources and to flora and fauna. Detailed inventories of local species, including those at-risk and endangered, led to protective measures such as fencing to divert animals to dedicated crossings either underneath or over-top of the roadway. The construction contract even has provisions around how, when and where crews can blast and how they can do excavations, Lorimer says, citing the use of drones to map the habitats of multiple bat species and efforts to protect large herds of bighorn sheep. “There are areas we have to avoid at certain times of the year when it’s lambing season. It’s really about understanding the [wildlife] and how to minimize the impact.”

Community consultation has helped address local concerns. For instance, Dart Creek water users will have access to a bulk water station in Golden while access to their current water intake is limited during the project.

The contract also requires creeks and streams be restored to their original condition through measures such as sediment control and vegetation retention. With the route key to tourism and commercial traffic, and residents relying on it for their daily needs, a detailed traffic management plan restricts full closures to overnight hours and requires advanced notice with schedules posted online. During the busy summer months, daytime stoppages will be limited to momentary traffic control for turning vehicles. Access will also be ensured during Easter and Thanksgiving long weekends, and open windows are planned for school buses, commuters and other essential local traffic even though other highways provide an alternate route.

The price tag reflects the complexities. The first three phases cost $326 million, while Phase 4 is currently projected to cost $601 million. That’s up one-third from an initial estimate of $450 million in 2016, and even then Phase 4 was looking to become one of the most expensive roadwork projects per kilometre in Canadian history. In 2019, former BC Transportation Minister Claire Trevena attributed the increase to a hot construction market, increased labour and material costs, a reallocation of interest and new design considerations.

With the province providing $386 million and the federal government $215 million, Phase 4 was awarded this past November as a design-build arrangement to Kicking Horse Canyon Constructors (KHCC), a consortium consisting of Aecon Group, Parsons and Emil Anderson Construction, completing a year-long procurement process. The $610 million includes the $440.6 million contract with KHCC plus $170 million for project management costs incurred since 2017, including conceptual and procurement work, archaeological and early environmental assessments, engineering and administration. 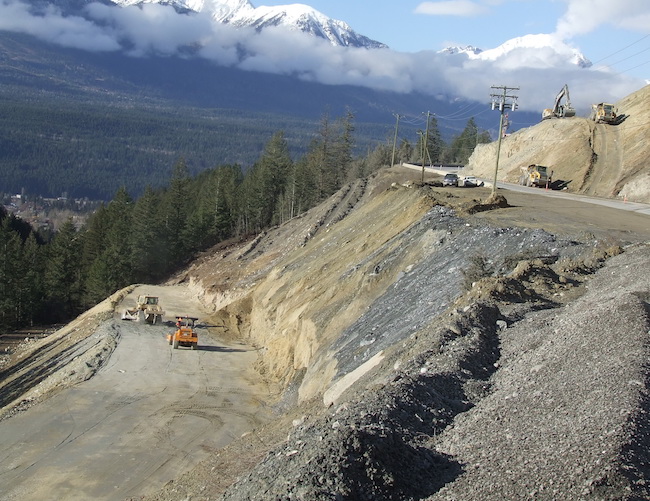 Construction work on the steep slopes during earlier stages of the project. PHOTO: Government of B.C.

While any highway redevelopment must obviously first and foremost benefit motorists, the Kicking Horse Canyon project also fits the provincial government’s strategy to ease a chronic labour shortage and reenergize an economy upended by COVID-19. With substantial completion slated for winter 2023-24, Phase 4 is expected to employ 100 to 300 workers at a time, and BC Infrastructure Benefits (BCIB), a provincial Crown corporation, will handle most hiring and prioritize local people, particularly Indigenous people, women and people with disabilities, through a Community Benefits Agreement. “With the right kind of adjustments, we can get more of those underrepresented folks into the skilled trades so they can help build the future of British Columbia,” says Greg Johnson, a BCIB representative. Furthermore, Johnson says a project of this scope represents a significant and long term economic boost. “It means there’s going to be more people in those communities who have the skilled trades they need for upcoming projects, and they’ll be able to live close to home and work.”

BCIB’s mission also includes safety, leveraging SiteReadyBC, a program of the BC Construction Safety Alliance, to provide workers with the core knowledge they need to understand safety requirements. Because BCIB handles most hiring, KHCC and its subcontractors can request workers experienced with specific machines and with hazardous landscapes, which seems apt for Kicking Horse Canyon. “If a worker doesn’t return home at the end of the day, there’s no community benefit or anything else that will return them to their family,” Johnson points out. “It’s some of the most challenging terrain anywhere in the country.”